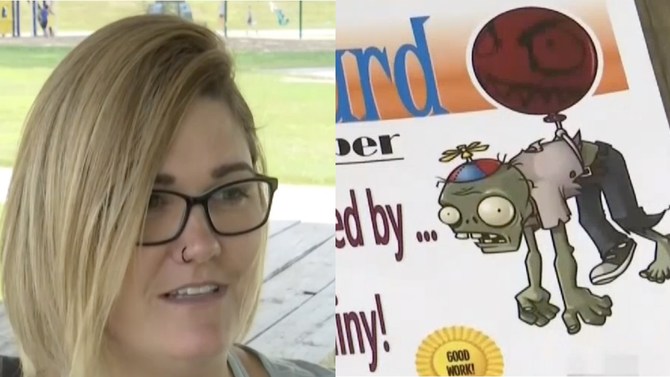 Tera Cooper’s son was presented with an “award” by his teacher for easily getting distracted. Cooper, after learning about the award, was understandably livid. After all, her son had been diagnosed with ADHD.

Her son, 13-year-old Derek, attends Plainfield Central School. Cooper told NBC Connecticut that she was confused as to why the teacher would find it funny to give the award to Derek.

The certificate titled “#ADDAward,’ featured a zombie held up by a balloon, as well as a gold ribbon that read “good work.” The award read, “Most likely to be distracted by…look something shiny!”

Cooper stated, “He had tears in his eyes. He’s embarrassed because he had to accept it in front of his entire class.”

Cooper has never met the teacher, but was sure that she was aware that Derek had ADHD. She said, “He is on a 504 plan at the school, so she is aware of it. I don’t know if she thought it was funny but it’s not funny. She’s the teacher. It’s supposed to be a safe place.”

The school’s principal, Scott Gagnon, told NBC Connecticut that he became aware of the incident on Friday evening, and that he met with the parents on Saturday morning.

He said, “At that time, parents were assured that, along with our central office administration, this matter would be handled promptly as we are acting on good faith in the interest of the student and his family.”

Kenneth Di Pietro, the Plainfield Public Schools Superintendent, stated that he would not comment on the matter until the investigation was completed. However, he later revealed in a statement, “Our effort to respond immediately and follow up is certainly evidence that we as a district and personally take such matters seriously.”

Cooper stated that she was considering speaking to a lawyer about taking legal action.

She said, “Hopefully make change. Make the administration more involved in what teachers are doing and protect the students from having to deal with something like this in the future.”

She stated that Derek received two additional awards from the same teacher. One certificate was for being the best improved in social studies, and featured a picture of a skeleton as well as the “good work” gold ribbon. The second certificate read “Most likely to borrow stuff and it never coming back!” and was titled “#BermudaTriangle.” It had a picture of a zombie and the “good work” ribbon.

According to Cooper, Derek had informed her that other students had received the “ADD Award.”