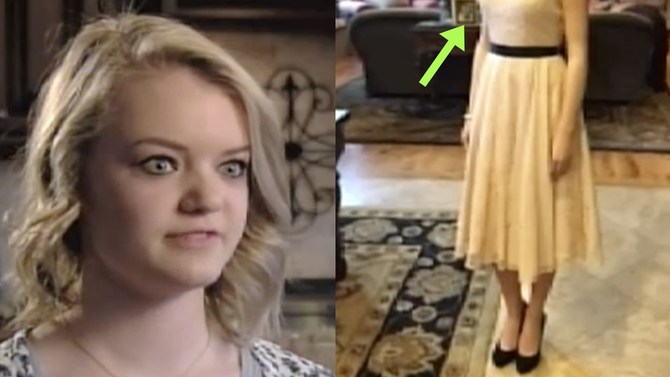 Gabi Finlayson had chosen the perfect dress for her Preference Dance at Lone Peak High School on Saturday.

She was soon approached by a school representative as she stepped into the venue of the dance and asked her to put on a shawl or coat to cover her exposed shoulders.

Gabi said: “She said, ‘Would you mind putting on a shawl?’ I didn't want to make a big scene so I said, yes. I had a coat in the car so I had to go back and get it.”

Gabi was “embarrassed” when she was asked to cover up, but this quickly turned into anger as she realized that she had to wear a winter coat over the dress during the entire event. She felt as if she was being shamed for what the boys may think.

She said: “Somehow my shoulders are sexualized. Like it's my responsibility to make sure the boys’ thoughts are not unclean.”

4 out of 1200 students were asked to cover their shoulders. The principal, Rhonda Bromley, stated that the students knew what the dress code was for formal events. The code reads:

“Formals, backless dresses and/or tops may not extend beyond the bottom of the shoulder blades. Girls’ dresses and tops must have a 2? minimum strap on each shoulder. Shawls, boleros and other shrugs are acceptable if worn over the dress at all times. Cleavage covered.”

Gabi said that she bought the dress in Paris because in her mind it resembled the classic and graceful style of Audrey Hepburn, her idol.  She was sure that her dress was within the school’s code, and she saw other girls with dresses that were questionable.

“There were a lot of dresses that were very short, very tight, a lot more exposing or revealing than mine,” she said.

Kristy Kimball, Gabi’s mom, was furious, stating that the school was sending negative and demeaning messages to the girls who were forced to cover up. “How have we gotten to the point that we look at shoulders as if they're somehow pornographic? As if they are this shameful thing,” she said.

Bromley maintained that teachers and students approved the dress code, and that the girls were not embarrassed when they were told that their dresses were inappropriate. “This was done by one of my female school employees in a very careful and sensitive way,” Bromley said.

However, Gabi stated that she felt like she was being shamed for wearing a perfectly appropriate dress. She wonders why the girls were the ones forced to steer away from what is deemed “inappropriate.”

“Maybe instead of teaching girls they should cover themselves up, we should be teaching boys that we’re not just sex objects that you can look at and derive pleasure,” she said.