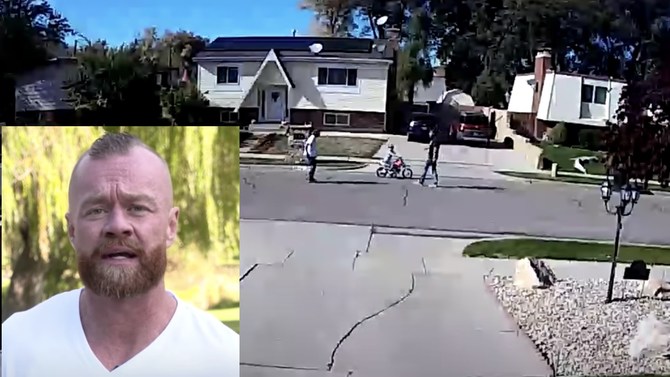 The SWAT team crisis in Utah responded to a neighborhood spat that turned deadly after 61-year-old Richard Lindem decided to shoot at Chris Ollerton.

The video shows Lindem stopping two boys riding their dirt bikes in the neighborhood. He then appears to slap one of the boys’ helmets before talking to the other boy and then slapping his helmet too.

Ollerton, father of the two boys, appears and confronts Lindem. According to authorities, Lindem pulled out a gun and fired three shots at Ollerton, who sent his kids back into the house.

Ollerton told Inside Edition: "[They were] absolutely terrified... Of the three [bullets], there was one that I literally felt zip past my head." Lindem barricaded himself inside his home, and police officers decided to call in the SWAT team to extract the armed suspect. The tense situation kept everyone on edge, and at one point a shot was fired from inside the home.

Lindem was finally taken into custody later that night.

According to Ollerton, Lindem was upset by the noise made by the kids’ bikes.

Ollerton said, "I hope he woke up the next morning and was like, 'Holy cow, I can't believe what I did to those little boys.'"

Lindem was charged with misdemeanor reckless endangerment and multiple felony charges of aggravated assault, child abuse, and discharge of a firearm. He has yet to offer a plea.