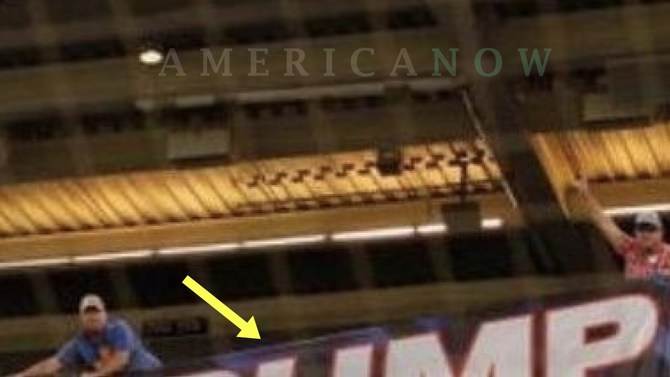 On Thursday, two men were kicked out of Yankee Stadium – one of them handcuffed – for hanging a large pro-Trump banner from the rail of the second deck.

Videos and photos show the two men hanging the “Trump Won Save America” banner from the first-base side of the stadium, which sparked boos from many in the crowd.

During the second game of the doubleheader between the Yankees and Blue Jays, a spectator in the deck below jumped up to try and pull down the banner. In photos taken by a photographer from The Post, the men were seen struggling with a security guard for the banner.

A video later posted on Facebook shows more security personnel and stadium employees at the scene, with some fans calling for the men to be removed. One of the men seemed to be in handcuffs as they were escorted up the steps away from the stands.

“Sounded like the entire crowd was booing until security confiscated the banner, which then resulted in a large cheer,” Max Goodman, a reported for Sports Illustrated, tweeted.

Lindsey Adler, a reporter with The Athletic, wrote: “Lots of booing here after some jabronis unfurled a ‘TRUMP WON’ banner off the second deck. (He didn’t).” “Now we have extremely loud cheering as the conspiracy theory banner people are led out of the section by security,” Adler wrote that after the men were escorted out.

“Is that in the un-vaxxed section?” one Twitter user asked.