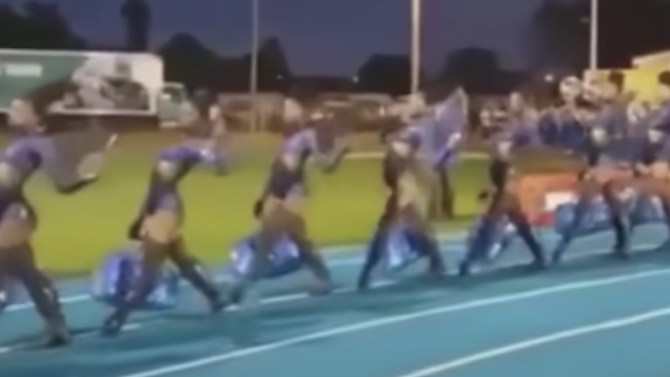 The principal of Miami Northwestern Senior High School, Wallace Arisitde, issued a public apology and promised to take action after a video of the dance team’s performance went viral. The video, uploaded by FlyHeight.com, showed the team dressed in racy costumes.

The members of the dance team, performing on the sidelines of the football field, were dressed in costumes consisting of glittery blue and black bodysuits, lacy pantyhose with garters, and high black boots.

The video sparked controversy, with many people slamming the school for allowing teenagers to wear that kind of costume. Arisitde released a statement revealing that the parents of the girls in the dance team had approved the costumes. He wrote: “While all the parents of the dancers who participated in the event approved of the attire, we understand the concerns that have been raised and sincerely apologize for any offense this may have caused. Looking ahead, we will implement a more comprehensive and stringent uniform approval process to ensure an appropriate representation of our school.”

The dance routine was also slammed, as it mostly featured hip gyrations and waving fans.

The video showed the team, each girl wearing full makeup and high ponytails, performing as the marching band passed by. FlyHeight captioned the video: “Is This Appropriate?”

The video got over 18,000 views on the site, and tens of thousands on Facebook.

The video drew mixed reactions from the community. Speaking to Local10, Miami Northwestern grandmother Debbie Frasier said: “If they're dancers, they're entertainers. So if you have the same problem, you have the problem with Beyoncé or young child stars who dress that way on national television.”

However, many slammed the skimpy costumes, and one Facebook user commented: “I think for a high school they totally could have done without the garter belts. its [sic] definitely other ways to jazz up a dance uniform.”

Another wrote: “This is a high school dance team! How in the hell did the adults think this was in the least bit ok?”