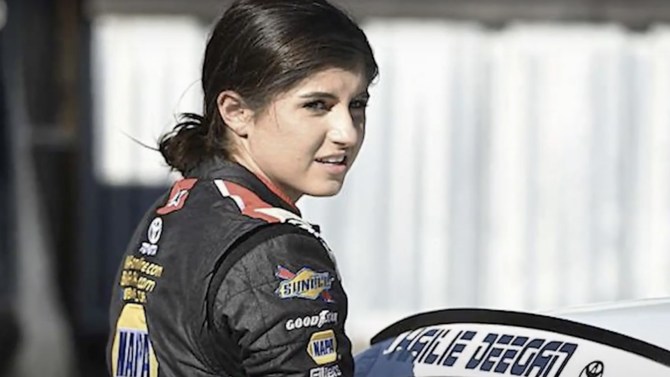 19-year-old Hailie Deegan, a rising NASCAR superstar, was forced to apologize on Sunday night after using the r-word during a virtual race.

Deegan was streaming on Twitch when she was nudged by another driver during the game race.

The video quickly went viral, with many slamming her for the derogatory word. She issued a lengthy apology shortly after the stream. She said: "Earlier tonight I used an insensitive word during an online race being broadcast on twitch. It was inappropriate slang and a stupid thing to do. I apologize to everyone who was offended by it."

"There's no excuse for it, and I know I have to do better for my sponsors and my fans," she added. Deegan is not the first NASCAR driver to find themselves in trouble following a virtual race. Last April, Kyle Larson uttered the n-word during a streaming event.

He was fired from his team, Chip Ganassi Racing, lost major sponsorships, and was suspended by NASCAR. The 28-year-old was reinstated after he met a number of stipulations set by NASCAR officials. However, he's basically since on probation until 2023. It is unclear whether Deegan will be facing similar punishment. NASCAR has yet to respond to requests for comment.

Deegan, daughter of motocross legend Brian Deegan, was the 2020 ARCA Rookie of the Year.