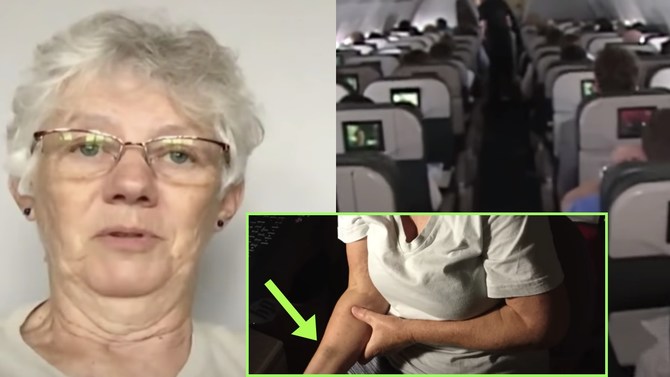 71-year-old Ellen Flemming claims that Air Canada banned her after she was removed from a flight following a dispute over garbage.

According to Global News, she boarded flight 8946 from Pearson International Airport in Toronto just after 8 a.m. with her husband and two grandsons.

She stated that her dispute with the flight attendant began when she “went to put my water bottle into the pouch in front of me” and found “wet garbage” inside. She then called over a flight attendant, who quickly informed her, “I don’t do garbage,” before proceeding to swipe “my hand away…and the garbage flew all over.”

A fellow passenger, Helen Hollett, stated that the attendant was “screaming” during the incident. Shortly after, the plane was turned around, and Flemming was informed by the crew that the decision was made because they were concerned about “the safety of the passengers.”

She bought a ticket from a different airline.

Flemming produced a letter from the airline which stated that Flemming had “exhibited aggressive behavior towards a crewmember,” including throwing her garbage “on the food trolley” and kicking a member of the flight’s crew.

The letter stated that there was no “ongoing prohibition” banning Flemming from flying with Air Canada.

The Peel Regional Police sent a statement to News Global, writing that “based on the information received, it was determined that both parties were involved in a loud verbal dispute” and “no criminal offenses were committed.”

Speaking to Global News, Flemming stated that she hoped to get an apology from the airline and reimbursement for the flight she booked after being removed from the plane.