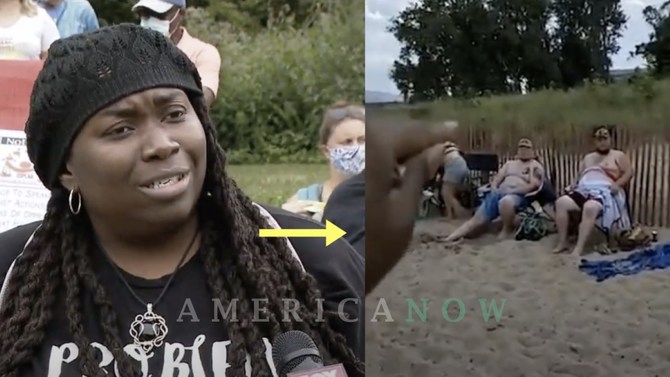 LaShandra Smith-Rayfield was at an Evanston beach when she learned that a group of white people was displaying a Confederate flag. She made her way to the group, confronting them about the “racist symbol of hate” they had hung up.

The incident occurred earlier in the week, with Smith-Rayfield, who is Black, slamming the group as they lounged in front of a fence lining Lighthouse Beach. The Confederate flag towel was hanged on the fence. Smith-Rayfield recounted the incident on social media, prompting Evanston’s mayor to rebuke the group’s actions and sparking protests in the city.

“I can’t feel comfortable in my own neighborhood. … That flag right there is my swastika,” she said in the now-deleted video.

She returned to the scene of the incident on Thursday with supporters, but declined to make a comment. As the incident unfolded on Wednesday, a “man of color,” tried to intervene, stating that he fought to defend the group’s right to display the flag.

“This is the United States of America, not the confederacy,” Smith-Rayfield responded.

She tried to buy the towel for $20 but was unsuccessful, so she finally left the beach and posted a second video asking why no one stood up to the group.

Later on Wednesday, she stated that she felt “a little better” after posting a now-deleted photo showing a small group of protesters who arrived at the beach with Black Lives Matter signs and stuck around until the group left. Evanston resident Terri Turner went to the beach on Thursday with Smith-Rayfield.

“I am a Jewish woman with mixed children, one of whom is LGBTQ, and that flag is against everything that I just said,” Turner stated. “I brought my daughter with me yesterday and we were up until [2:30 a.m.] trying to process how heinous that was.

“And it was purposeful,” she continued, adding that there was another protest scheduled at the beach from 2-4 p.m. on Friday. Evanston Mayor Steve Hagerty condemned the “display of hate” following his initial discrediting of reports about the Confederate flag being on display at the beach as well as posting an erroneous account of what transpired.

The mayor later wrote on Facebook: “My apologies to Ms. Smith-Rayfield and others for not getting the complete story before I posted on Facebook. Her courage and persistence is admirable and an example for all of us.”