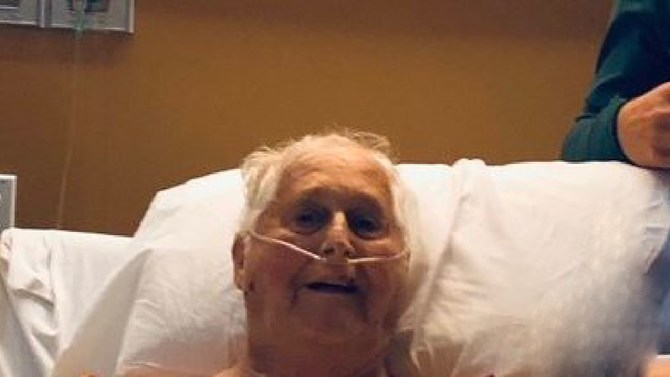 Norbert Schemm had a simple request on how he wanted to spend his last day, and his family complied. Schemm spent his last hours sharing a beer with his sons, talking, laughing, and reminiscing.

His grandson, Adam Schemm, told BBC News;  “My grandpa had been relatively healthy over the course of his life, but it was on the Sunday last week while he was in hospital that they realized it would be the end. He called his grandchildren to tell us on the Monday. We took the picture Tuesday night and then he died from stage 4 colon cancer on Wednesday.”

Schemm’s son, Tom, took a family picture and sent it to a WhatsApp family group. Adam posted the picture on Twitter, and captioned, “My grandfather passed away today. Last night all he wanted to do was to have one last beer with his sons.” The tweet quickly went viral.

In the picture, 87-year-old Schemm is lying in a hospital bed, holding on to his wife’s hand. There were tissues in his lap, and a bottle of beer in his other hand. His three sons are standing around him, and everyone is smiling.

The tweet garnered more than 4000 comments, with people sharing their own last wishes experiences.

One woman commented, “My grandmom did the same thing but with shots of Bailey’s.” She added a photo showing the moment.

Another one wrote “Cold beer and a Yankee game,” and attached a photo of him and his father with beers.

One comment read; “My brother in law wanted to play one last round of golf before he passed. Was 100 degrees and he was in so much pain. He only hit about 15 shots but made me play all 18 as that is what he wanted. Was such a warrior!”

Another posted a picture with the caption, “My grandfather just wanted a hot fudge sundae and wanted to see me again before he let go.”

Ben Riggs posted a picture of him and his grandfather. They were sharing a cigar, and one last beet. His comment read, "While death never comes at the right time, I think it's important to always try and find the silver lining.”

Another comment highlighted his friend’s grandfather’s last moment; “His grandfather was telling a joke, and as he got to the punchline he had a coughing fit, drank a little water, laid back, and passed away. They never found out the end of joke. My friend says his grandfather did that as a joke and is laughing about it in heaven.”

Speaking to Today, Adam Schemm said; “It was the last 90 minutes that they really had him. They drank beer and talked about family, and he made everyone promise to take care of my grandmother. They were married for 65 years.”