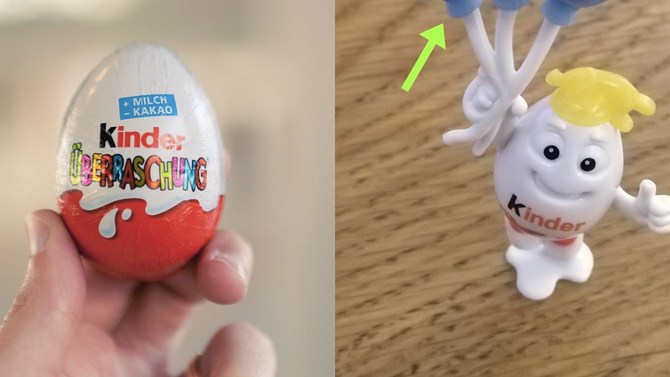 While Kinder eggs could not be legally imported into the United States because they contained a “non-nutritive” component, people have been smuggling them into the country for years. The milk chocolate shell contains a toy inside, and has been banned in Chile since the candy’s packaging is created to entice children.

The candy has caused controversy around the world, with many recognizing that the toy could be a choking hazard. In 2016, a child in France died after choking on a Kinder egg toy. This has led Kinder to create a new FDA-approved version of the candy, Kinder Joy, which was debuted last year. The candy is put in a separate half from the toy, and both are encased in an egg-like plastic package. However, reentry into the American market has led to a few unprecedented issues. Yahoo! News Australia revealed that people in the country have been finding Kinder egg toys that are in a nutshell… “racially insensitive.”

The toy in question is an egg-shaped cartoon holding three balloons each with the letter k written in bold. Unfortunately, the toy eerily looks like an egg man raising a KKK bouquet. While many children may be unaware of the toy’s inadvertent message, many parents are familiar with the Ku Klux Klan’s activities. Since October, Twitter users have been calling for Ferrero, the company that manufactures Kinder, to take action by tweeting pictures of the toy and tagging the company. One Facebook user wrote, “what on earth Kinder?” after her mixed-race niece got the toy.

“This is not ok even if you try and say it was a mistake,” another woman wrote on the company’s Facebook page last December. “As a global company you have a responsibility not to issue racist and anti-semetic [sic] propaganda.” A spokesperson for Kinder told Yahoo that the “racist” connotation was unintentional, and that the toy was supposed to have only one balloon, but that adding two more added a “more robust structure.”

She said, “We sincerely apologize for any offense caused due to the inference of how the three Ks read together on this toy. We had absolutely no intention to make associations with the Ku Klux Klan and we truly apologize to our consumers for any unintentional offense caused. We do not support this organization in any way.”

She maintained that the company would destroy the remaining stock of the toys, and would be “revisiting [their] internal processes,” and replacing the toys for affected consumers.