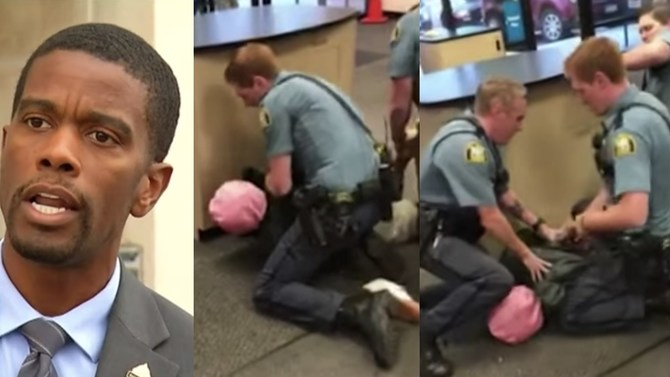 Officers from the St. Paul Police Department have been called out after a video surfaced online showing an arrest in a UPS store.

At around 6:30 p.m., an officer spotted a 13-year-old girl in the parking lot of the University Avenue BP gas station. Knowing that there was a trespassing order against the girl by the gas station, the officer approached her.

Steve Linders, the St. Paul Police Public Information Officer, told Pioneer Press; “He knew from previous experience with the female that she has been [banned] from the property.

When she saw the officer approaching her, she ran onto the rail platform. The officer decided not to chase her, fearing for the girl’s safety.

He was planning to head back to the station after visiting the girl’s home when a call came in through his radio, asking officers to respond to the LA Fitness and TJ Maxx parking lot. There had been reports that four juveniles were trying to break into cars.

When officers got to the scene, they saw the juveniles walk into a UPS store and they followed. They found the girl hiding behind a counter and asked her to lie on her stomach, but she refused. She screamed “no” and tried to kick the police officer.

She scratched and punched the officer in the head, and tried to kick him in the groin as she was being taken into custody.

A store employee took a video of the incident, which showed the girl screaming and grunting while officers attempted to subdue her. Amidst the wailing, grunting, and screaming, more officers joined in to help subdue her. She was eventually taken into custody.

She continued fighting even after she was handcuffed, and was led away kicking and screaming. Ryan Wilson, the store owner, told The Pioneer Press that he saw her try to kick an officer in the face as she was carried out.

"When I first saw that video I was just shocked, I was overwhelmed, I wanted to cry… I thought it was unacceptable treatment of a child of officers who are supposed to protect and serve," Levy-Armstrong stated.

Melvin Carter, St. Paul Mayor, stated, "I don't think there's anyone of us who wants to see a video of a young girl, in physical interaction with a St. Paul police officer. We don't know enough to say much beyond that, yet that it's disturbing to see an image we don't want to see in our community. We owe it to ourselves to be transparent, and to be thorough, we owe it to ourselves that we check."

Officer Linders stated that an investigation was underway, and that administration officials were reviewing the arrest to confirm whether the officers’ actions were within departmental policy.