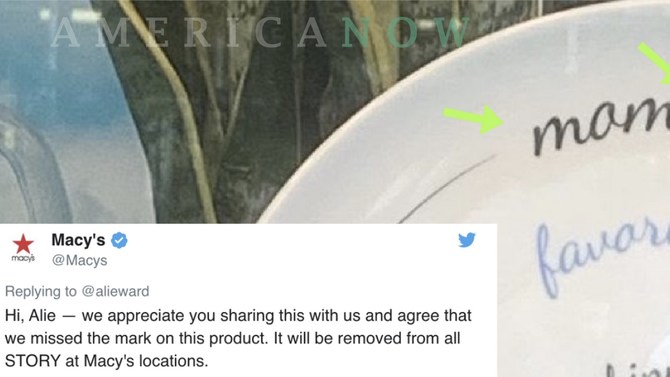 A collection of plates being sold at a Macy’s department store created a major backlash from customers online.

Alie Ward took to Twitter on Sunday to admonish the store for selling the plates. The podcast host tweeted a picture of the plates with the caption, “How can I get these plates from @Macys banned in all 50 states.”

The picture showed a large dinner plate with three concentric circles outlining different portion sizes. The circles had the words “skinny jeans,” “favorite jeans” and “mom jeans,” presumably stating what clothes one would fit in depending on the serving.

Next to it was a small appetizer plate with two circles written “food coma” and “foodie.”

The tweet went viral, with many agreeing that the message on the plates was inappropriate and insensitive to those who were struggling.

One comment read, “This is a toxic message, promoting even greater women beauty standards and dangerous health habits.”

Macy’s responded to Ward’s tweet, stating that they would be removing the plates from their shelves. The plates were being sold at STORY, the concept shop inside Macy’s flagship store in New York.

The company also sent a statement to TODAY Food, which read: “We apologize to our customers for missing the mark on this product. After reviewing the complaint, we quickly removed the plates, which were only in our STORY at Macy's location in Herald Square.”

However, some found the plates funny, with one person tweeting: “I LOVE those plates, where can I buy a set before you remove them. Don’t pay attention to people with no sense of humor!!!” The plates are an original design by Pourtions, a company that creates plates and glasses intended to help customers stick to the portion guidelines.

Founders of Pourtions, Dan and Mary Cassidy, provided a statement to TODAY: "As the creators of Pourtions, we feel badly if what was meant to be a lighthearted take on the important issue of portion control was hurtful to anyone."

The statement continued, "Pourtions is intended to support healthy eating and drinking. Everyone who has appreciated Pourtions knows that it can be tough sometimes to be as mindful and moderate in our eating and drinking as we’d like, but that a gentle reminder can make a difference. That was all we ever meant to encourage."

The plates, which are no longer sold at Macy's, are still available on the Pourtions' website, and other select retailers.