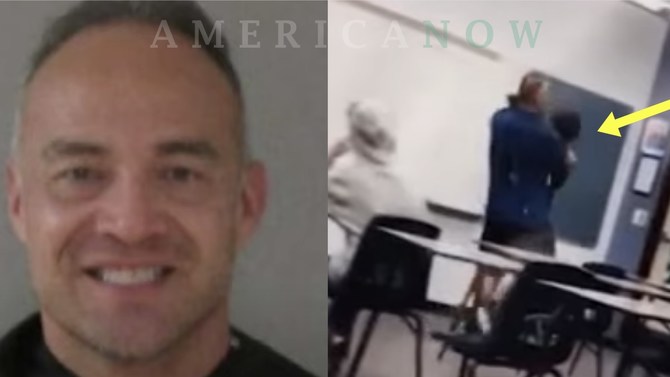 A Palm Coast middle school employee was arrested after he was caught on video violently grabbing a student and shoving him.

The video shows Paffumi grabbing the 14-year-old student in the classroom, lifting him out of his chair and carrying him out before shoving him into the hallway.

The arrest report stated that the incident began when the teen played music on his computer in class. Paffumi asked him to turn the music down, but he refused. When he took the student's computer away, the student called him a disparaging name, the arrest report stated.

In an interview with WESH 2 News, the student's father, Keiondrae Woodside, stated that the family immediately wanted to press charges when they saw the video.

"I was infuriated. As a parent when you send your kid to school, you expect for them to get an education at a safe, sound environment and then I saw the video and that really took me over the edge," he said.

He added that his son should not have been disobedient, but that he’s concerned his son could have been seriously hurt. "He traumatized him mentally and emotionally and not just him but the other kids that had to witness that," Woodside added.

Charged with battery, Paffumi has two prior arrests in Flagler County from 2012.

He was hired by the school district in 2005.

He got probation for a battery conviction involving another adult and a criminal mischief charge that was dismissed. Flagler Schools Superintendent James Tager released a statement saying, "The actions of this teacher are not consistent with how we expect our educators to act and behave and it will not be tolerated. We immediately removed Mr. Paffumi from the classroom following the incident and placed him on leave pending an investigation."

Tager stated that there had been a handful of incidents during Paffumi’s career that required suspensions and some counseling.