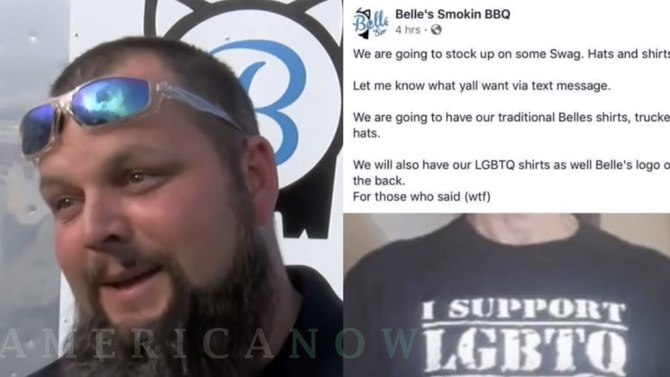 A Northern Kentucky BBQ food truck has become the subject of great talk and criticism among hurt customers. It was selling shirts with the LGBTQ acronym, and this was not taken lightly by most people. People critical of the shirts think that they show a lack of respect for the beliefs of those who associate with the LGBTQ community.

Belle's Smokin' BBQ says it did not mean to launch attacks on LGBTQ people. According to the business, the shirts that were on sale had initials describing something completely different. The initials stood for “Liberty,” “Bible,” “Guns,” “Trump,” and “BBQ,” according to the owner.

Reports indicate that the employees working with the business have been wearing them for over a year now. For all that time, apparently there wasn't any uproar.

The owner of the business is known as Jamie Smith, and he was the first one to start marketing the shirts. He advertised them through his Facebook account and even managed to sell about 100. Reports indicate that he pulled down the post shortly after he realized the negativity it was attracting.

A Louisville-based organization known as the Fairness Campaign has been at the frontline in criticizing the business. Over the years, this body has remained dedicated to fighting for equal rights among all, and it seems rather disappointed by this latest development. The organization has been reaching out to its followers to know how they feel about the shirt.

The reactions have been intense with a significant number outlining that the business has just alienated its customers. A member called Randall Hendricks said that he will be spreading the word about discouraging customers from eating at Belle's.

The executive director of the Fairness Campaign, Chris Hartman, reveals that the post by his organization went viral. He thinks the business entity resorted to a bad business strategy. The negative reviews are many, and even the rating of the business has dropped to 3.4 out of 5 stars.

The business has moved swiftly to make an apology to all groups that felt offended. It said that it had a deep respect for all belief systems and lifestyles.