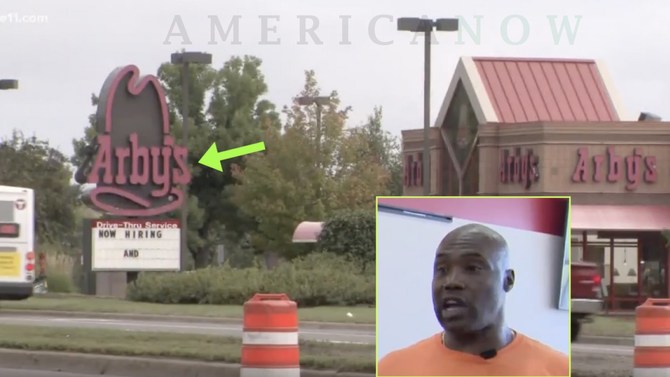 An Arby’s restaurant in Minneapolis issued an apology after its sign was vandalized, the letters rearranged into a racist message.

The sign, located in Brooklyn Center, was discovered by the Brooklyn Center Police Department on Saturday morning. The letters had been rearranged to read: "NOW HIRING [racial slurs and offensive sexist terms].” The words were removed from the sign, and authorities are investigating the incident.

Speaking to KSTP, a spokesperson from the Brooklyn Center said that the sign was rearranged to create an offensive word for prostitutes and a racial slur. In a statement to KSTP, the restaurant stated that it apologizes "to everyone exposed to that message."

In a tweet posted on Saturday, Arby’s Guest support stated: "Overnight, our reader board was compromised & someone put up a message that was extremely offensive. The message has since been taken down. We're cooperating with local law enforcement officials & will take appropriate action against those involved."

Brooklyn Center Police Department has yet to offer a statement about its investigation.

This is not the first racial incident to occur in a restaurant this year in the U.S. A black woman in Dallas accused the owner of a pizza shop of racism after he called her aunt “darkies.” Speaking to Newsweek, Tamika Sanders said that her aunt, Shiri Gupton, recorded the owner of Carmine's Pizzeria of yelling and cursing at them to leave the restaurant.

"He was angry and hateful and this place is not safe for us," Sanders told Newsweek. "We need to speak out so no one will spend their money there every again."

A Taco Bell in Philadelphia fired an employee in February for writing "Chink" on a customer's receipt. Young Lee, a University of Pennsylvania Ph.D. student, recounted the incident on his Facebook page. The post garnered over 1,000 reactions and 214 shares.

"We do not tolerate this behavior. This employee no longer works for the brand, and the franchisee is retraining its staff to ensure this incident will not happen again. Management has reached out to and apologized directly to the customer," representatives from Taco Bell wrote in an email to The Daily Pennsylvanian.