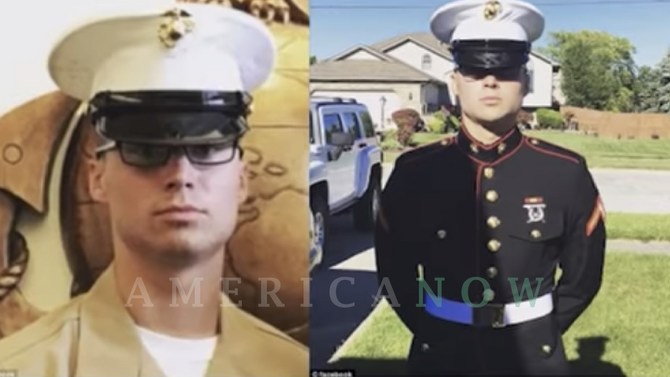 Jacob Dalton Stanley showed up for his senior class graduation dressed in his Marine uniform. The former Crown Point High School senior had completed his boot camp training on Friday and had flown back home for his graduation on Tuesday night.

He attended the graduation rehearsals with his classmates, and was told by the principal that he would not be allowed to graduate if he was wearing his uniform.

He ignored the principal’s warning, and showed up in the uniform. He was turned away, and his name was not read as they were handing out the diplomas.

Chip Pettit, the school principal, maintained that the school’s policy mandated adherence to the uniform dress code during graduation. Students wear a standard cap and gown, and those with special distinctions wear stoles or chords over the gowns.

“This practice has served us well as it has allowed the class to show unity by dressing the same, but also allowing for individual accomplishments to be recognized by wearing stoles and chords,” Pettit stated.

He continued: “Last night, at our 135th graduation ceremony, students in all of the aforementioned groups wore their gowns, stoles and chords with great pride. We have continued wearing the traditional gown as this is the last formal event of the year and a celebration of the time our graduating seniors have spent at Crown Point High School. This tradition is not intended to be disrespectful to students, parents, or our community, but as a source of pride for our students. It is also not intended to be disrespectful to our students choosing to serve in the military, our active duty servicemen and women and our veterans. We are forever grateful for the sacrifices that they make on a daily basis for our freedom.”

Stanley’s classmates were outraged by the principal’s decision. Leann Tustison, one of the graduates, said that the decision was “Absolutely ridiculous. He's in the military putting his life on the line for us.”

Marine Corps Major Clark Carpenter stated that the military was not involved with the dress code set by schools for their graduations.

“The Marine Corps does not dictate what specific high schoolers can or cannot graduate in. That decision is up to school leadership,” he said.