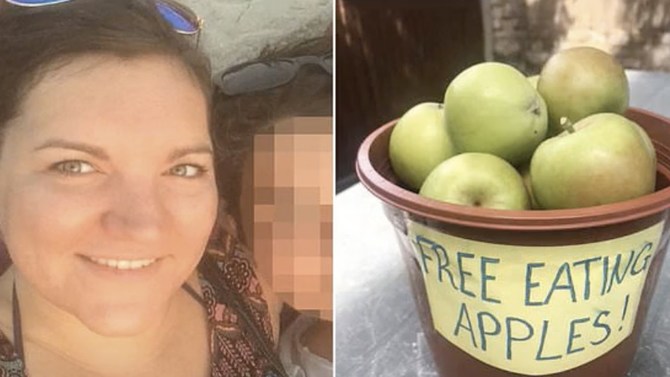 33-year-old Lydia Farrell picked up her fallen apples and left them outside her home for neighbors and passers-by to enjoy. However, the city council fined her £150 for “fly-tipping.”

She believed in her “good deed” as she put the apples inside a box clearly labeled “free eating apples” and left them on the pavement.

The apples had fallen from a tree in her garden and she knew they’d go to waste if she didn’t share them. However, she got home and found a letter from the Ealing Council pushed through her door, and she was horrified that the council accused her of littering. The letter ordered her to pay a £150 fine or face the courts.

However, the west London council stated that it will withdraw the fine following intense backlash online.

She stated that she was “very disheartened” by the letter, especially because she walks past “real fly-tipping at the end of my road every day.” She told she told Metro.co.uk: “We'd been away for a few days and not only did we come home to that fine but also someone had forced entry into our back garden and broken our fence. So two real crimes were committed by other people and I'm the only one who gets fined. I just feel it was quite sad that the council would fine me for doing a good deed.”

Ealing Council stated that its leader, Councilor Julian Bell, had reached out to Lydia as soon as he was made aware of the incident. “The council recognizes the spirit of the residents' actions was with good intentions. We will be in touch with Ms. Farrell to rescind the fine. Our priority is to make sure the borough is clean and litter free and we apologize for any inconvenience this may have caused,” a council spokesman said.

Lydia stated that she would continue to share the apples but that she may have to “fix them to my wall somehow.” She has some passion fruits ripening as well.