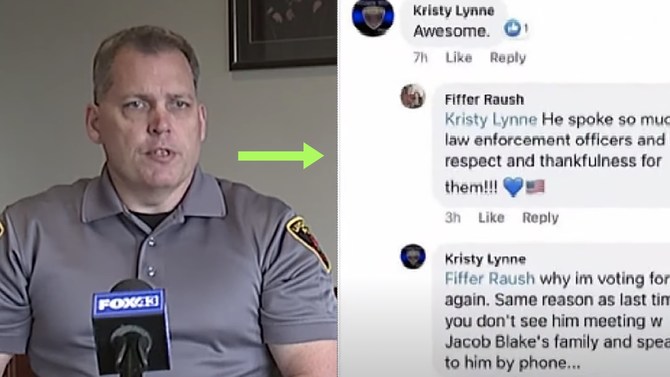 Lancaster Police Chief Jarrad Berkihiser’s October 31st retirement was announced earlier this month, but reports have since emerged that he may have been asked to resign or pushed into retirement following his wife’s social media post.

Speaking to WGAL, John Fiorill of the Fraternal Order of Police Pennsylvania State Lodge stated that the mayor asked Berkihiser to resign following his wife’s political comments on social media.

Fiorill added that “we provided him [Berkihiser] with our solicitor for legal advice.” LancasterOnline reported that Kristy Berkihiser’s Facebook had posted about Trump’s campaign rally at the Harrisburg International Airport last month. The friend wrote that Trump “spoke so much of law enforcement and his respect and thankfulness for them,” to which Kristy responded that it was “Why I’m voting for him again. Same reason as last time. You don’t see him meeting with Jacob Blake’s family or speaking to him by phone.”

Blake, a Black man, was shot in the back in August by Kenosha police. His family later met with Democratic presidential candidate Joe Biden. Fiorill pointed out that Kristy was the one who made the comment, not the chief, and that Berkihiser had nothing to do with it and knew not to get involved with politics.

Lancaster Mayor Damene Sorace stated that she couldn’t comment on why the chief was leaving the department because of an agreement between them. Sorace released a statement on Facebook: “There is an agreement that legally binds Chief Berkihiser and me to not comment on the nature of the discussions we had, nor on the factors that led to his decision to retire. It is my obligation to abide by the letter of the law in not breaching that document. I also feel morally and ethically bound to the spirit of the agreement. It is my duty as mayor to honor this agreement and I will do so.”

She stated that the search for a new police chief would begin within the week.