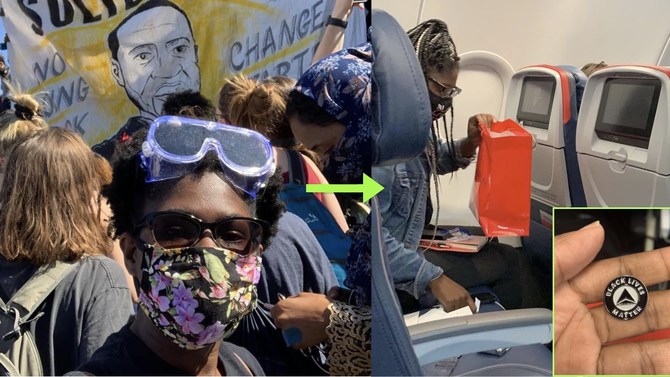 Demetria Poe has heaped praises on Delta Air Lines for "taking a stance" against racism and discrimination; this came after her seatmate harassed her during a recent flight from Minneapolis to Washington, D.C.

Speaking to Poe USA TODAY Wednesday, Poe revealed that a white woman appeared to swap her American flag face mask for a Blue Lives Matter mask on purpose after realizing her seat assignment was next to that of a Black woman. Blue Lives Matter is a movement that supports police officers and is a counter-movement to Black Lives Matter, which aims to eradicate white supremacy. Poe, a kindergarten teacher in Minnesota, shared her experience in a viral Facebook post-Tuesday. Despite the harassment, she was happy with how Delta handled the incident and stated that she "will only fly Delta". She revealed that the company stood in solidarity with her and gifted her a Black Lives Matter pin along with a seat upgrade on her return flight.

The 25-year-old black woman said she engaged in discussion with the white woman after she pointed out her support for the Blue Lives matter movement unprovoked. She said that she pointed out unjust deaths of Philando Castile and George Floyd, who were killed by Minnesota officers. However, the white woman continued to utter disgraceful remarks. Poe said the irony was that she was on her way to the "Commitment March: Get Your Knee off Our Necks" in Washington, D.C., on Aug. 28. A march was demonstrators demanded long-lasting change to end systemic racism.

She was, however "grateful" that her fellow passengers came to her defence and flight attendants offered to relocate the woman. She said she felt the genuine concerns the flight attendant had for her and her people. Delta Air Lines also put out a statement in support of Poe. In reply to Poe's viral Facebook post, the airline wrote: "When we say Black lives matter, we mean it. You matter to us, Demetria."

Poe said the airline upgraded her seat on her trip back to Minneapolis, and she received goodies including a Black Lives Matter pin engraved with Delta Air Line's logo.