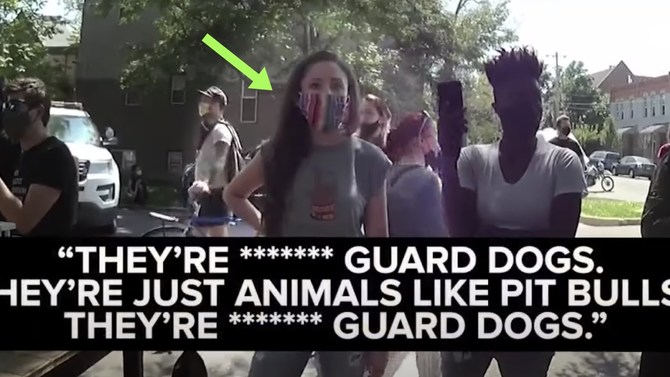 Denver Police Officer Mallory Lutkin filed an ethics complaint against Denver City Councilwoman Candi CdeBaca on August 19 for hurling racist remarks at officers who were tasked with crowd control in August as they cleared out a homeless encampment.

According to KDVR, Lutkin filed the complaint on September 4th.

Police stated that two officers were assaulted as they were trying to detain an armed suspect, and additional officers were called in to secure the area.

“The officers who were assaulted radioed for assistance and a large number of officers responded to the area to move the crowd back,” Denver Police Spokesman Doug Schepman wrote in an email to KDVR.

Lutkin was among the officers tasked with crowd control that day. “I responded to the area of 2900 Glenarm on a disturbance while District 2 officers were arresting an armed party and officers had been assaulted,” Lutkin wrote in the complaint. “Upon my arrival I was advised to hold a perimeter post to secure the scene as a large crowd was gathering. While on this line I had my body worn camera activated.”

Lutkin stated in the complaint that CdeBaca later arrived at the scene and demanded to speak with a supervisor.

“CdeBaca approached Officer Wallace Sam and I,” Lutkin continued. “CdeBaca pointed at Officer Sam (who is black) and stated ‘You should be ashamed.’ CdeBaca then pointed at me (I am white) and said, ‘You, I would expect this from you.’”

She added that the councilwoman then lectured the officers at the scene, telling them to look up the laws about slavery.

“When CdeBaca made these statements toward me, I felt she was brining my race into the issue she had with officers being called to the area,” Lutkin wrote. “The statements directed at me insinuated I am racist because I am white.” The complaint stated that the city councilwoman then began to hurl insults at the officers for the benefit of the crowd around her.

“CdeBaca, while still standing in front of me stated ‘They don’t f–king know they don’t know how to read,” Lutkin wrote. “This is some coward a—s–t right here; they don’t know this s–t they do what they’re told.”

The complaint stated that CdeBaca pointed at an officer who was writing in his notebook and said “Look, he is writing! He might know how to read.”

Lutkin stated that CdeBaca’s actions were “an attempt to ridicule police and further enflame an already tense situation,” and that the councilwoman was “trying to spin up a group of anti-police protesters.”

According to the complaint, one officer’s four teeth were kicked out as they tried to arrest a man with an exact replica gun, and another officer’s bodycam was stolen by a protester.

Lutkin stated in the complaint that CdeBaca took photos of the officers handling crowd control, and posted them on social media with an anti-police caption.

“The comments made by Councilwoman CdeBaca were meant to dehumanize and humiliate officers on the scene in front of protesters,” Lutkin wrote in the complaint. “Her comments incited other protesters to demean officers and encouraged them to continue to verbally abuse police officers.”

She stated that in the video posted on Facebook, CdeBaca encouraged protesters to engage in physical altercations with officers. “Let them hit you, there is a higher liability now,” she said in the video. “Sue these f–king cops.”

Lutkin stated in the complaint that police later found out that the stolen bodycam had been turned over to CdeBaca during the protest, but that despite knowing that the law required officers to have bodycams filming, CdeBaca held onto it and failed to return it to the officer.

The camera was returned 51 hours after it was taken, the complaint stated.

Lutkin filed her complaint with both the city’s Ethics Board and the Equal Employment Opportunity (EEO) commission.

CdeBaca deleted the video of the incident from Facebook and denied requests to share it with KDVR.

Denver police released bodycam footage that supported Officer Lutkin’s account of events detailed in the complaint and suggested that CdeBaca had plotted with protesters to keep the officer’s stolen bodycam.