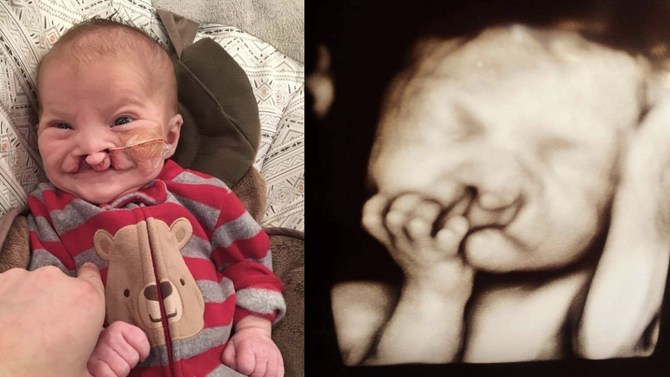 A couple has decided to create awareness about the bilateral cleft lip and palate condition, after learning that their son has the condition. They faced some level of cruelty by doing so, but they have also learnt that there are people with kind hearts.

Sara Heller, 26, the mother told TODAY through an email about the situation. In the email, she said that a stranger has restored their faith in humanity. She said being Brody's parent has taught her that people care and they want to listen to his story. At 24 weeks of pregnancy, an ultrasound showed that Brody had a cleft lip and palate. Heller and partner Chris Eidam, 30, of Omaha, Nebraska, struggled with initial shock but soon realized how beautiful their son looked and decided to share many pictures of him.

Experts are yet to know the cause of cleft lips and palates, a condition that occurs when the tissues don't fuse during pregnancy. According to the Centers for Disease Control and Prevention, 2,650 babies are born with a cleft palate, while 4,440 babies are born with a cleft lip with or without the cleft palate. They undergo a series of surgeries to repair the lips and palates. And, in most cases, they require therapy to learn to talk and eat. When the couple started sharing photos of their son to help create awareness, some unkind things were said online. In her words, she wasn't prepared to defend her 3-month-old baby and answer questions on why he looks 'different' from other babies. However, rather than confront people online, she decided to educate them.

Some hours later, Heller was having lunch with Brody and some of her girlfriends when the server came to her with a folded napkin. She thought it was a note from someone, but she was stunned as she opened it. It was a $1,000 check with the message in the memo line, "For the beautiful baby." She said tears fell from her eyes immediately, and the happiness that followed was indescribable.

The check aided Heller and Eidam in paying some of Brody's medical bills. According to Haller, the emotional support from people has reminded her and her family of the good in the world.