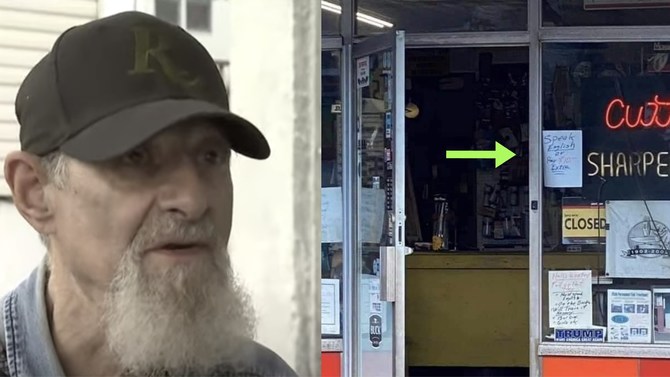 A small New Jersey business is under fire after its owner posted a sign on the front window reading: “Speak English or Pay $10 Extra.”

For two weeks, Cutters Edge, a Clifton-based knife and blade sharpening shop has been receiving calls from angry people, and has been slammed online with people demanding that local officials close the store.

“SHUT THEM DOWN FOR BEING RACIST PIECES OF S–T! RACISM IS NOT WELCOMED IN NJ!” @iamfarias tweeted. Outraged people posted a flurry of negative one-star Yelp reviews with comments about the owner being a racist.

“ANYBODY with a parent, sister, friend or associate who speaks another language should feel enraged by this,” Keka R. wrote on Yelp. “I’d rather go to a business that fully understands we are living in a country where 350 different languages are spoken and nobody should be charged for simply that.”

In an interview NorthJersey.com, the owner, Dave Feinberg, tried to defend the sign. The reporter revealed that there had been at least a dozen phone calls about the sign during the interview alone.

Feinberg stated that he had put up the sign two weeks ago “out of frustration” after he tried dealing with a customer who “made no attempt to speak English.”

“I had something to get off my chest. The reason for the $10 is because he wasted 10 minutes of my time,” he explained. He admitted that it was a “mistake” to suggest that he was going charge extra.

He stated that people walked into the store “laughing and giggling” at the sign, and that some said, “Wow, I’m glad someone did this!”

“I think people kind of laughed it off,” he said, and insisted that it initially was not “a problem” until the phone calls started blocking his line.

“Some of the people are quite vulgar,” he said of the calls. “People say ‘I hope you go out of business and lose everything.'” After the barrage of furious responses, Feinberg pulled down the sign, and told the news site that he may replace it with an apology. However, he conceded it may be too late to reverse the damage to his reputation.

Clifton council member Rosemary Pino stated that the sign was odd in a town that prides itself on its diversity.

Clifton told NorthJersey.com: “Messages like this put us back centuries.”