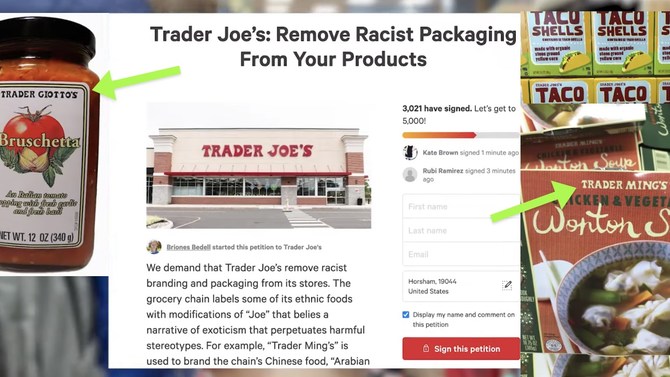 Trader Joe’s has maintained that it is not rebranding certain products despite a petition started by a California teenager calling them racist.

The company dismissed reports that it had plans to change the names of some of its international food brands like "Trader Jose" and "Trader Ming's."

Trader Joe’s added that it disagreed with the accusations that the product names were racist, and stated that it does not make its decisions based on petitions.

Trader Joe’s released a statement last week: "We make decisions based on what customers purchase, as well as the feedback we receive from our customers and crew members. If we feel there is need for change, we do not hesitate to take action." The company also stated that the names of its international foods "show appreciation for other cultures."

The petition’s description read, "The Trader Joe's branding is racist because it exoticizes other cultures - it presents 'Joe' as the default 'normal' and the other characters falling outside of it - they are 'Arabian Joe,' 'Trader José,' and 'Trader Joe San.'"

The petition has over 5,000 signatures.
Earlier in the month, the company stated that it had made the decision years ago to only use Trader Joe’s name on its products, and was in the process of updating its ethnic-sounding product labels. "While this approach to product naming may have been rooted in a lighthearted attempt at inclusiveness, we recognize that it may now have the opposite effect - one that is contrary to the welcoming, rewarding customer experience we strive to create every day," Trader Joe’s spokeswoman Kenya Friend-Daniel said at the time.

She added that the packaging for some of the products had already been changed, and that they expected the process to be completed "very soon."