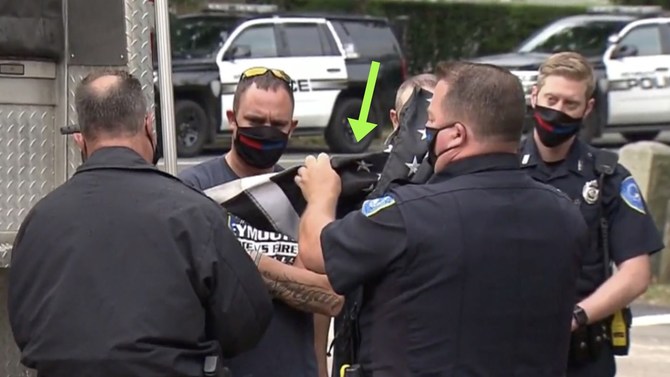 On Thursday, police took down the Thin Blue Line flags flown by the Hingham firefighters on their fire engine on orders of city officials.

Hingham Firefighters Local 2390 had previously stated that its members were unable to bring themselves to remove the flags, so they teamed up with the local law enforcement officers and other first responders to remove them on their “own terms.”

“We were aware of an impending order to remove the flags from the apparatus,” the union wrote on its Facebook page.

“We did not want to risk the chance of having these flags removed from the trucks in a disrespectful manner. The decision was made to conduct the removal of the flags on our own terms to provide the highest level of respect that they deserve,” it continued.

The union had donated the flags to the Weymouth Police Department (WPD) in honor of Michael Chesna, a 42-year-old Weymouth Police Sergeant and father of two who was killed while chasing a suspect on foot on July 15, 2018.

The suspect attacked Chesna, hitting him in the head with a large rock and knocking him to the ground. He then took his duty weapon and shot him several times in the head and chest. The WPD was part of the Thin Blue Line flag removal ceremony held on Thursday morning.

“Police officers from the night shift, who worked alongside Sgt. Chesna removed the flags from our trucks,” the firefighters union wrote. “The flags will be brought to the Weymouth Police Headquarters where they will continue to fly with honor.”

The union expressed gratitude over the outpouring of support it received in the past week, and stated that it will continue to stand in “solidarity” with law enforcement.

“We will continue our unwavering support for our brothers and sisters in law enforcement and first responders everywhere,” the firefighters union said.

The controversy over the Thin Blue Line flags began on July 23 after the union stated on its Facebook page that its members would be flying the flag to mark the anniversary of Sgt. Chesna’s death. “The flags were recently put on the apparatus leading up to the anniversary of the senseless murder of officer Michael Chesna in our neighboring community of Weymouth,” the post read. “We continued to fly the flags after the anniversary in support of the law enforcement officers in our own community, as well as all law enforcement officers who put their lives on the line every day.”

Despite the union maintaining that the flags were not a “political statement…nor was it an attempt to show support for, or against, any specific political party or advocacy group,” critics filed complaints with the city, and officials ultimately decided to have the flags taken down.