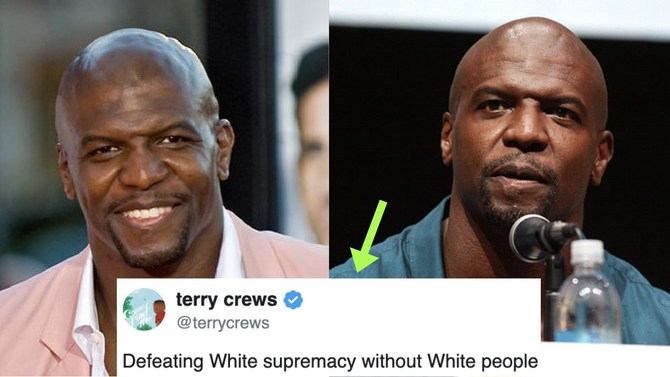 On Sunday night, Terry Crews aired his opinions on Twitter, writing in part: "defeating white supremacy without White people creates Black supremacy," adding, "Equality is the truth" and "Like it or not, we are all in this together."

While the Brooklyn Nine-Nine star never elaborated the tweet, many took issue with the term “Black Supremacy.” Not long after, his name was trending on Twitter.

Tyler James Williams, Crews' TV son on Everybody Hates Chris, responded to Crews with a series of tweets: "Terry, brother, I know your heart and you know I have love for you and always will. No one is calling 4 black supremacy & the narrative that we are hurts our cause & our people. We’re just vigorously vetting our 'allies' because time & time again they have failed us in the past."

"Our people are tired of white people who put on a good face a claim they 'arnt racist' while operating and benefiting from the privilege of a clearly racist system. We’re not trying to do this alone. We KNOW we can’t. But we refuse to have allies who won’t go the distance," he added.

Williams maintained that he wasn’t "trying to call out" Crews, but that it was “all love always." He concluded: "But we’re rightfully angry right now and fed up with anyone not with our cause wholeheartedly. I don’t want to see that energy pointed your way or diverted from the cause."

Crews replied to Williams’ tweets, writing: "I understand, Tyler. I was not saying Black supremacy exists, because it doesn't. I am saying if both Black and Whites don't continue to work together-- bad attitudes and resentments can create a dangerous self-righteousness. That's all." Comedian Godfrey also responded to Crews’ tweet, writing: "I love you as a friend Brother Terry. But I disagree with you 100 %. No such thing as Black Supremacy. That is a tactic that Racist whites use to counteract our rebellion to their horrific treatment of us. It's called Gas lighting. Black pride isn't anti white."

Crews replied, "I agree. I'm not discussing white people here. there are 'gatekeepers of Blackness' within our own community who decide who's Black and who's not. I have often been called out for not being 'black enough'. How can that be?"

Human rights activist Kevin Powell replied to Crews’ tweet, writing: "This makes absolutely no sense, makes very Black self-hating assumption that Black folks would actually try to do harm to White people in major ways, when there is no proof in history of any such behavior even remotely close to White supremacist behavior. Please read books, sir."

Crews replied, "That's not what I'm saying Kevin. At all." Powell then responded: "Terry, with all due respect, given your platform, you cannot just post something like that even remotely suggests that Black people would fall into 'Black Supremacy' if we battle White Supremacy without White people."

Crews wrote: "Kevin, I've learned that people will take anything you say and twist it for their own evil. Anything."

Crews later tweeted: "Any Black person who calls me a coon or and Uncle Tom for promoting EQUALITY is a Black Supremist, because they have determined who's Black and who is not."