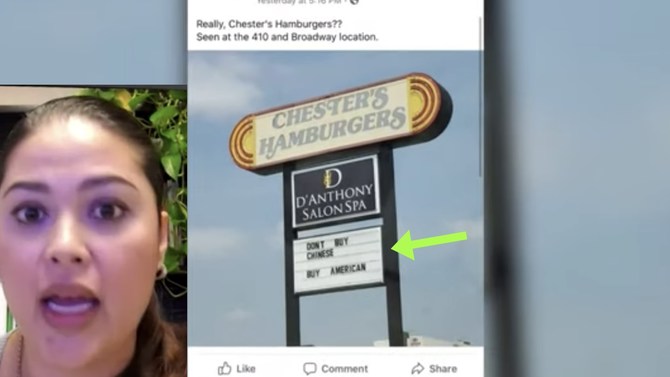 When the "Don't buy Chinese [...] buy American," marquee sign was put up at the 1006 N.E. Loop 410 location in San Antonio, it was unclear which business it belonged to.

However, the owner of Chester's Hamburger's, a longtime San Antonio chain, revealed that the marquee did belong to the restaurant, and that he meant what it said.

Dale Mabry wrote in an email, "Regarding the marquee at Chesters Hambugers, there is no implied meaning other than to buy American products and not products from communist China." He responded to the feelings of “outrage and disgust” over the marquee, saying: "We have already changed the marquee copy."

The Asian American Alliance of San Antonio called out the marquee on social media, slamming it for its racist connotations. Kin Yan Hui, president of the local chapter of the Asian American organization, stated that he was satisfied with the sign’s removal and that he considered the matter to be "concluded."

However, he did reveal that the community was outraged over the sign, which was brought to his attention on Tuesday. He said, "There was outrage and disgust by the Asian American Alliance of San Antonio."

He stated that he was aware of xenophobia towards Asian Americans in response to the coronavirus pandemic, but that the marquee was the first sign that made him aware that the Asian American community in San Antonio was being “singled out.”

He stated that the racism Asian Americans typically experienced locally was expressed in “unwelcoming looks.” "While it has happened, it is rare that racism related to violent acts are taken against Asian Americans in San Antonio," he said.

Hui stated that while he rarely witnessed or experienced in, anger “permeated” San Antonio. He highlighted the July 2016 incident at the Chester's Hamburgers in Universal City where a customer hurled racist comments at a black family. The video quickly went viral.

Although staff was not involved, the community slammed the restaurant for "lack of response" during the incident. The incident sparked controversy online, where some users suggested a boycott of the restaurant after a Chester's Hamburger employee later fueled the debate by hurling more derogatory comments.