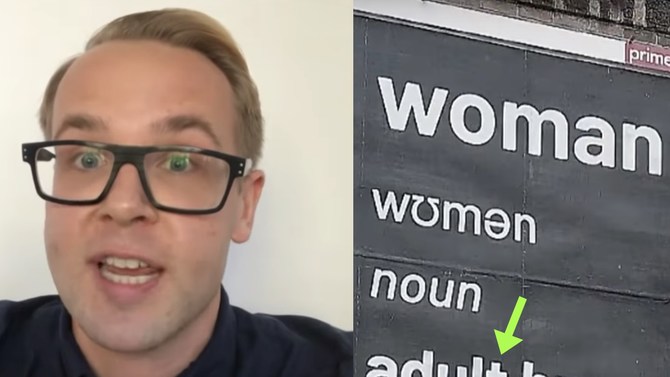 Speaking to the BBC, Kellie-Jay Keen-Minshull stated that she had spent about $800 on a billboard which read: "woman, wʊmən, noun, adult human female."

However, the billboard was taken down after an LGBT activist complained about Keen-Minshull’s campaign, stating that it represented a “hate group.”

Keen-Minshull countered the accusation, but stated that the idea that trans women were actually women was “preposterous.”

She stated that she put up the billboard in Liverpool because she was responding to Mayor Joe Anderson’s support for the trans community.

Dr. Adrian Harrop, who voiced complaints about the billboard leading to its removal, said that it was a "symbol that makes transgender people feel unsafe." Dr. Harrop, who describes himself as "an ally of the transgender community," stated that he had “no doubt” in his mind that that was the intention of the billboard.

However, Keen-Minshull maintained that her “main concern” was that “woman” was "being appropriated to mean anything," adding that the billboard was a means to “start a conversation” about women’s rights.

Primesight, the ad company that put up and then removed the poster, stated that it had been “unaware of the motive” behind Keen-Minshull’s campaign.

The company added that it had been "misled" by the "messaging" and was "fully committed to equality for all."

Stonewall, an LGBT charity, talked about the billboard, stating: "Our 2018 Trans Report revealed that one in eight trans employees (12%) have been physically attacked at work, while two in five trans people (41%) have experienced a hate crime or incident in the last year. These are not just statistics, they represent the lives of trans people, which are only being made worse by increasingly frequent attacks in the media, online and in public spaces. If we want to improve life for trans people we need more people and organizations to be visible, active allies."