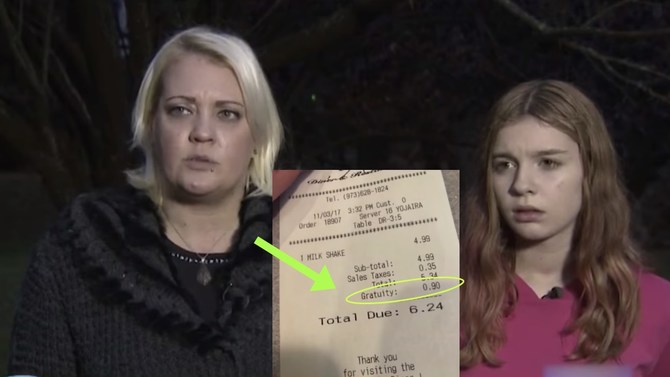 In New Jersey, a diner has attracted the outrage of various parents who have promised to boycott the joint.

Wayne Hills Diner, a popular hangout spot for students, added an 18 percent gratuity on meals ordered by youngsters. Melissa Desch, mother of an 11-year-old student at Schulyer-Colfax Middle School, said that her daughter and her friends were victims of the price gouging by the diner.

She told WABC, “My daughter looked down at her bill and realized that there is a charge for a tip, an 18 percent charge per child.”

Desch, a lifetime patron of the diner, stated that she has never been automatically charged a tip before. She believes they were targeted “because they’re kids and they don’t know any better.” She added that the receipt asks diners to leave a tip although it had already been charged.

“Even adults don’t always tip and it’s not anything against the servers, but you can’t assume that these kids don’t know what they’re doing,” Desch said, adding that she had personally spoken to owner of the diner about the issue.

She said that the owner told her that it was “policy because the kids run out and he feels that they don’t tip well, and they don’t know how to tip was the explanation.”

A manager at the diner told The Post that an 18 percent tip is added to the pre-teen’s bills simply because they don’t tip.

The manager said, “We have kids coming in here every Friday, 20 to 25 at a time. The kids don’t leave no tip,” adding that they added the gratuity “because my employees need to get paid. They don’t work for free.”

He stated that the publicity around the incident has led the diner to employ a lawyer. He said, “We love the kids. They’ve been coming for years. We’re a family-owned business. There’s too much publicity for nothing.”

The diner’s menus include a fine print at the bottom which reads: “management reserves the right to add 18 percent gratuity to check.”

Desch said that she and some parents have decided to boycott the diner.

“There are enough parents that are willing to not let their kids go back there, and if it’s the same group she’s [her daughter] always hanging out with it could be 20, 30 kids. I’m never going to go back, not after this,” she said.