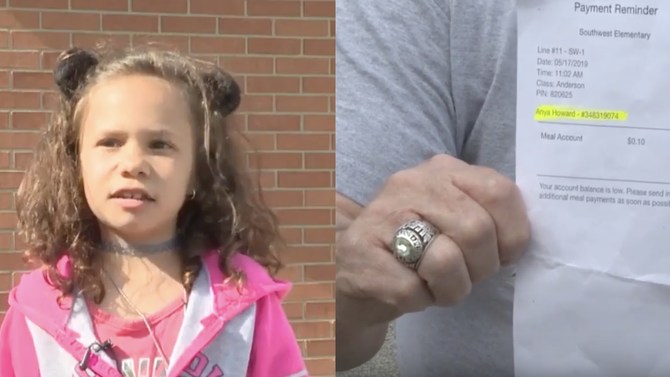 6-year-old Anya Howard was asked to return her food after the cafeteria aide discovered that the funds in her student account was not enough to cover her $2.25 meal.

Anya, a student at Southwest Elementary, had to go to the back of the lunch line to get a peanut butter and jelly sandwich. She said that a number of her classmates laughed at her, making her feel “sad.”

Speaking to News8, she stated that she had to walk past 20 students, and some of the commented on her payment issues. Her grandfather maintained that the “cafeteria walk of shame” was humiliating and unnecessary.

He said, “When she was talking to me about it, she was more than ‘sad,' I mean, that’s embarrassing for a little 6-year-old.”

According to a note received from the school on Friday, Anya’s cafeteria credit had gone down to $0.10. Dwight stated that the school never informed them about the account’s status.

“They waited until there was a dime left, denied her the opportunity to eat the lunch that she had [been served and tried to pay for] and then she had to go to the end of the line to wait for a PB&J,” he said. Dr. Kent DeKoninck, the Greenwood Community Schools superintendent, stated that parents are given payment reminders when lunch accounts have $5 remaining.

He sent a statement to News8: “It is not an uncommon occurrence for multiple students to be served the alternate lunch on any given day. Any time this happens, our staff looks to handle all of these as discreetly as possible… We do allow elementary students to charge two hot meals before receiving the alternate meal.”

However, the payment reminder that Anya brought home had a note stating that Southwest Elementary would no longer allow any meals to be charged.

The note read: “Starting Monday 5/13/2019 we are no longer allowing any Café accounts to go into the negative. If there is not enough money in your child’s account to cover the entire meal, they will be receiving a peanut butter sandwich and a milk.”

DeKoninck stated that Anya Howard’s family had not contacted the school’s administrators about the issue. He declined to comment on any specifics about their complaints.