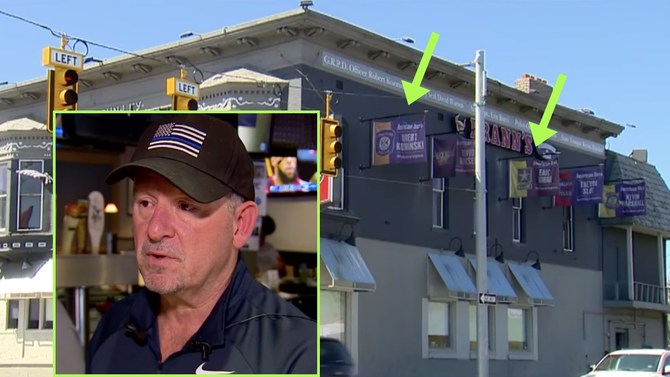 In Grand Rapids, Michigan, Johnny Brann, owner of Brann’s restaurants, maintained that he would not remove the signs on one of his restaurants that have the names of fallen soldiers and police officers.

He said, “Simply put, I’m not taking them down. I know all the families of the fallen heroes and I committed to them that their sons are going to be remembered. It’s so important to them and me.”

He stated that he was informed that the signs and flags outside Brann’s Steakhouse on Leonard Street NW near Turner Avenue violated city ordinance.

“I was sent a violation notice from the city of Grand Rapids for flags on the side of the building as well as the names up above the flags of all the fallen heroes,” he said.

According to News 8, the city stated that the signs were in violation because of their size and number. They sent the letter to Brann after a complaint was filed by a resident.

Brann said that the flags were on top of the restaurant for almost five years, but a year ago, they were relocated to the side of the building. He then added the nameplates a year and a half ago.

He said, “They have to respond to complaints, which I understand and respect. I received the notices, I read them and filed them. They can stay in the file because I’m not taking them (the flags) down.”

One flag is dedicated to U.S. Army Specialist Eric Burri, who was killed in Iraq in June 2005. His father, John Burri, stated that he didn’t understand why someone would choose to complain now.

“It’s very upsetting knowing that after they’ve been up there a while already, someone is complaining and they want to do something about it,” he said.

He believed that the flags and signs should remain.

He said, “This is this man’s business. It’s his building. This is supposed to be the land of the free. At what point do you say enough is enough.”

Brann’s situation drew a lot of attention, and members of police and military support groups came to the restaurant on Sunday from all over the state to support the owner and the restaurant.

Amy Waltrop of Back the Badge Michigan said: “We understand cities need ordinances, and we get that, but it’s more important we honor the people that sacrificed everything for us.”

Members of the TeamG8#38 group were also present at the restaurant.

Brann stated that he was planning to file an appeal with the city of Grand Rapids during the week.

“They will be up there and they will not be taken down,” he said.