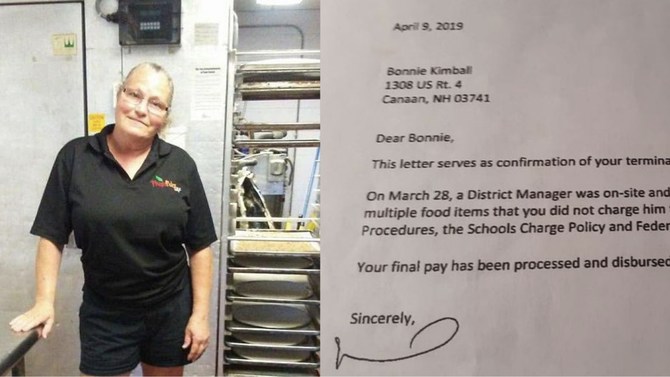 On March 28, Bonnie Kimball was serving students at Mascoma Valley Regional High School, like she’d always done for the past four years. On this day, she served a student who stated that he couldn’t pay, and she allowed him to pay the next day.

She was subsequently fired for her kindness.

The day after, the student came to school and paid the $8 lunch debt he owed from the previous day.

Kimball’s story was shared on social media, and many were quick to slam the school for firing her.

She was offered her job back inclusive of back pay, but she refused to take it.

She told BuzzFeed that they only offered her the job because of the negative media attention. She said, "They did not care about me then. Why would I [help them] now?"

She added that she was sad about the attention that the incident had gotten, saying, "It should have been a natural act of kindness that [anyone] would do."

She was an employee of Café Services, a vendor responsible for providing school lunches to the Mascoma Valley Regional School District. The company stated that Kimball had been fired in April for violating the company’s policies.

Speaking to Valley News, Kimball stated that they had been instructed by their bosses to avoid any type of scene if they served a student who couldn’t pay. At the time, the company was hoping to get their contract with the school district renewed. The contract was later renewed.

The school district released a statement saying that they were working with the company to ensure that the incident never happened again.

The statement said, "This situation reminds us all that we are lifelong learners."

The district revealed that a third of the students in the district were recipients of free lunches which includes a daily entrée, milk, fruits, and vegetables. Excluded from the free meals are "à la carte" foods like chips, sports drinks, or other items not considered as "essential nutrition," the district said.

Superintendent Amanda Isabelle stated that she received complaints from a number of parents about Kimball’s firing.

She said, "As a school district, we understand the importance of rules and procedures, but upon reflection, I have become sufficiently convinced that it is wrong of us to assume that all the responsibility falls to the vendor, and I do not believe our communities would accept that explanation of this situation. We must be accountable for the people who work in our schools."