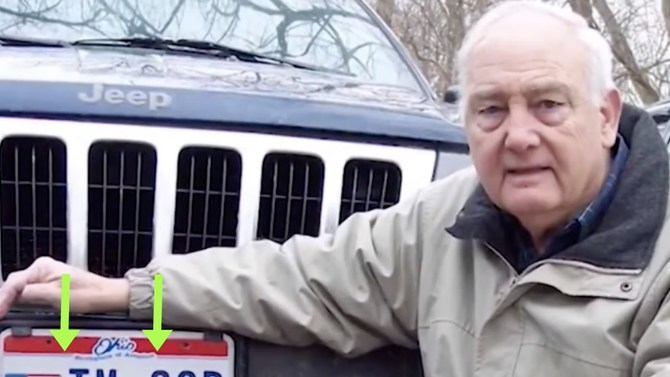 Bennie Hart, a self-described constitutional activist and atheist, filed a suit against the Kentucky government and won. The county was also ordered to foot Hart’s legal fees.

The 80-year old says he’s God, and even got a vanity plate to support the claim. The plate reads, “IM GOD.”

For 12 years, Hart drove around Ohio with his vanity plates, and when he moved to Northern Kentucky with his wife, he was hoping to get new “IM GOD” plates. However, the Kentucky Transportation Cabinet sent him a letter stating that the vanity plate he was requesting was vulgar and obscene. Hart saw this as a sign to fight back, so he sued the commonwealth. "I tell people, 'Stand up.' The government will run all over you if you let them. You know if you roll over and play dead, they'll roll over you,” he said.

Hart enlisted the help of ACLU and the Freedom from Religion Foundation in his suit. A federal court ruled in Hart’s favor, stating that denying Hart the license plate was a violation of his First Amendment rights.

Hart has his plates on the back and front of his vehicle.

The retired postal worker was more than satisfied with the outcome of the lawsuit. He said, "I think the Constitution is the most sacred thing that's ever been written. It guarantees your right to religion, speech, your right to assemble. It's just a beautiful document.”

A federal judge ordered Kentucky to pay Hart's legal fees, which amount to more than $150,000.