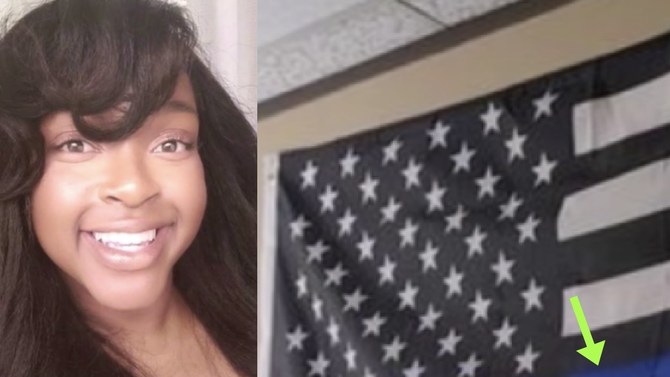 Karimah Guion-Pledgure filed a lawsuit against the Multnomah County for “fostering a racially insensitive workplace” after a colleague pinned a “Blue Lives Matter” flag.

According to the suit, when Guion-Pledgure complained that the flag “demeans” and “denigrates” the Black Lives Matter movement, some of her colleagues began harassing her. She suffered debilitating stress and health problems because of the harassment.

The flag was put up by a probation officer over the officer’s desk in September 2017, and Guion-Pledgure and some of her black colleagues complained about it. However, supervisors refused to have it removed.

On Thursday, county commissioners approved the $100,000 settlement, which came with a number of conditions. Guion-Pledgure would be required to resign, effective Friday. However, she could still re-apply for a job with the county.

Guion-Pledgure started working in 2011 as corrections technician for the Department of Community Justice.

“She’s disappointed that she has to leave there and that they couldn’t make it a safe and welcoming work environment,” said Ashlee Albies, Guion-Pledgure’s attorney. “They say they’re working on that, and we hope they really are.”

Albies said, “She was out of work quite a lot. It was incredibly stressful for her. I think it’s important that she take care of herself.”

Guion-Pledgure stated that some of the hostility she faced came six months after the flag was put up by the officer. In response to the flag she put up an “equity wall” that had pictures of minorities killed by police. Her managers asked her to remove the pictures, but she declined, stating that she would only remove the pictures if the Blue Lives Matter flag was also taken down. A week later, the management released a new rule stating that personal pictures had to be less than 5-by-7 inches.

That day, she found sticky notes written “Thanks a lot” and “Bitch” at her desk.

Guion-Pledgure original lawsuit asked for $420,000, and was filed in Multnomah County Circuit Court.