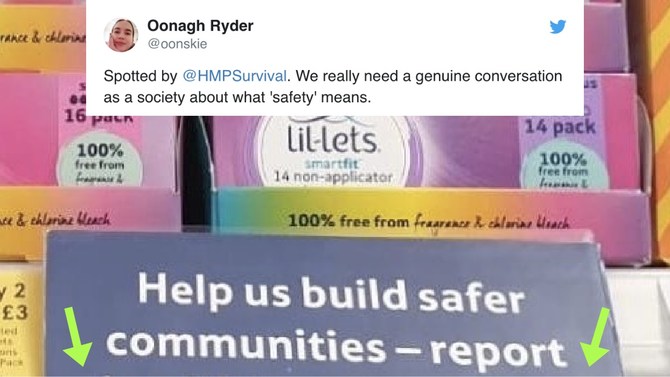 Social media users were outraged after the picture of a sign in one Tesco store was posted online. The sign asked customers to report anyone they saw stealing tampons.

Many called out the store for propagating sexual discrimination against women and individuals of other gender identities who experience menstruation.

The sign, which was in the feminine hygiene products aisle of a store in Kensington, London, read: “Help us build safer communities — report shoplifting to a member of staff.”

Tesco has since apologized for the sign, stating that it was “very sorry” for the oversight in one of its stores.

Speaking to Buzzfeed, a Tesco spokesperson stated that the offensive sign has since been removed.

“We know that the cost of buying essential sanitary products can be a real struggle for some, which is why we were the first retailer to cover the cost of the ‘tampon tax’ [also known as the ‘pink tax’] to make these items more affordable. We want everyone to feel welcome in our stores and are very sorry for any offense caused,” the spokesperson said.

Liberal journalist Oonag Ryder received the picture of the sign from a friend, and uploaded it on Twitter. She said, “We really need a genuine conversation as a society about what ‘safety’ means.”