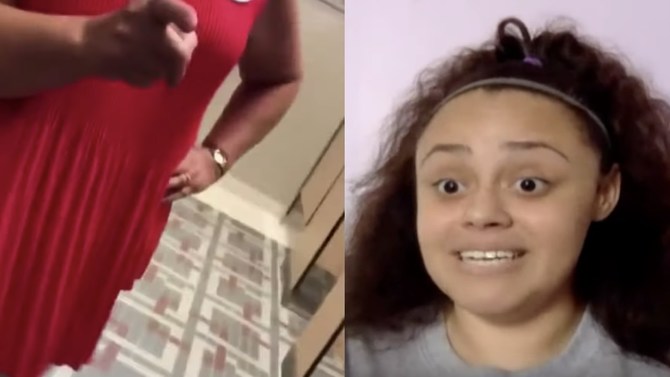 Jenna Munger, a 19-year old member of the Swansboro Methodist Church in North Carolina, is known for her beautiful voice. During a contemporary Sunday service, Jenna took to the stage with another friend.

After leaving the stage, she headed to the bathroom to check on a loved one’s health through her phone. What happened next was unimaginable.

Referring to a congregation member, Jenna recounted: “She had gotten up from her seat from out in the audience and had followed me in there. This is all happening during church, of course, so it was crazy.” She stated that the woman kept calling her fat, and telling her that she should dress in more appropriate clothes for a “chubby girl.”

After enduring moments of the criticism, Jenna began recording the incident. As Jenna emotionally begged her to leave her alone, the woman pointed a finger at Jenna and continued scolding her.

The woman threatened: “Don’t come back on that stage with shorts, I’m warning you.”

Jenna, who had been diagnosed with hypothyroidism, was upset by the shaming, especially since she had lost thirty pounds by eating healthy.

She said: “I have always struggled with my weight for the entire time I’ve been alive, it’s always been up and down, up and down, and so hearing that from someone who is either equally the same weight or even a little bit bigger than me, looking at me and saying, ‘You’re fat, fat girls don’t wear shorts,’ it’s like, what?”

However, this wasn’t the first time that Jenna had been insulted by the same woman. The church came to the teen’s aid the previous time, and did so again after the recent incident.

Senior Pastor G. Kevin Baker stated: “We are shocked and saddened by this act. The church is supposed to be a place of safety, love, and acceptance.”

A church memo, bearing the woman’s name, was posted online, leading to massive backlash from the community.

Responding to the memo, Jenna posted a video on Twitter, saying: “I want everyone to understand I do not hate her, I do not hate that woman and I could never hate her because that’s not what God told us to do. Instead, I forgive her. Yes, the words hurt. It hurt, but from this, I want people to take this as clearly bullying is wrong no matter who you are or what age.”