People keep all types of animals as pets. While most people opt for the more common species of animals like dogs and cats, others choose animals that are a bit more bizarre. For example, people enjoy having birds, and Guinea pigs and some people like having genuine pigs. That’s why one man is outraged that his neighbor sent his 400-pound pet pig Princess to the slaughter after she wandered out of her pen.

Although the police were looking for Princess’s owner, the neighbor decided to kill the pig anyway and profit off of her flesh. 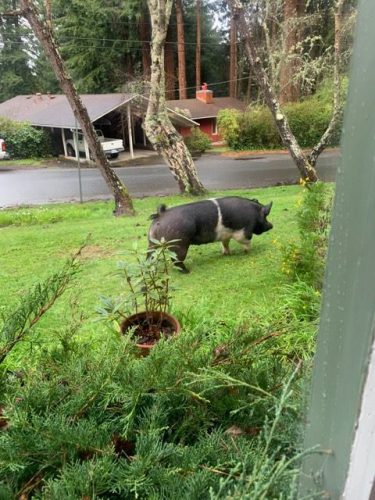 The pig initially wandered out of her pen on March 23 in Humboldt County. However, she wound up being found on a neighbor’s property the following day and was even featured in a photograph as part of a lost and found.

The Arcata Police Department, which gets lots of calls about wandering livestock, came to the home of the Hampshire pig and asked the neighbor if they wouldn’t mind watching the animal for a few hours while they went and searched for the pig’s owner. As it turned out, the police returned an hour later to recover the pig and found the neighbor already butchering the pig for meat.

“We were totally shocked and surprised to learn that the pig had been slaughtered,” Arcata Police Department chief Brian Ahearn said. He added that they reached a “reasonable arrangement” with the lying neighbor, claiming they had “no reason to believe that that individual was going to do that.”

The neighbor likely lied to the police officer and simply put the pig up for slaughter.

Arcata Police Lt. Todd Dockweiler told the SF Gate that “given the state of the butchering process he was in, he must have slaughtered the pig very shortly after the officers left.”

Not only did the neighbor lie to the police officers, but he also tried to keep the meat and profit off the lost pig.

Meanwhile, the owner of Princess, Carrie Hogan, is heartbroken that her neighbor killed the “very sweet” pig. She said that the pig loved to be around people and was super affectionate. In other words, she was the perfect pet, although she was 400 pounds. Hogan said that Princess was the family’s pet and had just turned one in January.

Will police officers charge the neighbor with a crime? In California, it is a crime to butcher an animal that does not belong to you. That’s why the man who did it could face charges. But will he?

The police department has not commented on that.

“The hardest part of this is knowing that there’s somebody out there that’s this kind of a savage,” Hogan said.

Hogan is angry at the police department for giving the pig, albeit unknowingly, to the man who was intent on killing it.

“He took it upon himself to give my animal away, and then it got butchered,” Hogan said.

Chief Ahearn said, “We’re evaluating whether there was a crime. We believe there was,.”

Do you think Princess’s killer deserves to be charged?