A Florida frat boy held a twisted belief about who he was as he committed a brutal murder. After becoming the prime suspect in the attack and murder of a couple from Martin County, Austin Harrouff’s defense attorneys are gearing up to get him free by pleading an insanity case – and you may be inclined to agree once you hear what the murderous college student thought as he tore into the flesh of his innocent victims.

Harrouff was arrested for the 2016 murders of Michelle Mishcon and John Stevens. He slew them in their garage as if they were animals. During his killing spree, Harrouff also targeted the couple’s neighbor, Jeff Fisher. He had arrived in an attempt to save the lives of Mischon and Stevens. 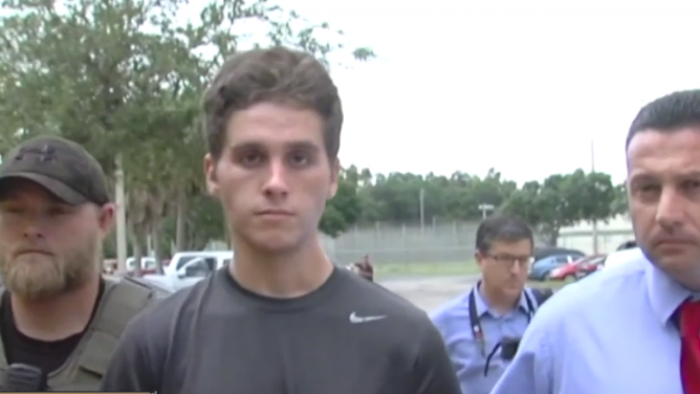 Investigators eventually arrived on the scene. When they did, they found the Florida frat boy chewing on Stevens’ face as if it were a rawhide chew toy. And that may have been playing into Harrouff’s plan of legal defense from the beginning.

Because Harrouff was guilty as sin, his defense team recruited Dr. Phillip Resnick, a forensic psychiatrist, to asses whether the frat boy was insane or not. They wanted to see if they could lighten his sentence with an insanity plea for the murders on August 15, 2016.

Dr. Resnick’s report played right into the defense team’s plans. He claimed that Harrouff suffered from a “severe mental disorder” when he was committing murder in Martin County. He was said to have had Bipolar I Disorder as well as an Acute Manic Episode with Psychotic Features.

Dr. Resnick conducted a six-hour interview with the defendant at the Martin County jail. He also scoured the frat boy’s journals and internet searches. He even looked at an interview the college boy had with Dr. Phil.

On his computer, Harrouff researched words like “mania” and “hallucinations,” which could play right into his plot of pleading insane.

During their interview, Harrouff described the day before the attack. He looked at Dr. Resnick with a knowing glint in his eye and told the forensic psychiatrist that he thought he was half man half dog. He said he could run “super fast.” His sister told the psychiatrist that Harrouff thought he was “one with the animals,” so he’d play the bushes or sat in the backseat of the car where the dogs usually sat.

On the night of the murders, Harrouff noticed a light on it the deceased couple’s home. But when he arrived at the garage and found Mischon, she screamed. This made the alleged half dog man think she was a “witch.” So, he told the psychiatrist that he attacked. When Stevens arrived, he attacked him too.

Neighbor Jeff Fisher heard the cries and came to help. Harrouff then unleashed his animalistic rage on him.

Although police found Harrouff chewing on Stevens’ face, he claims not to remember being taken into custody. He only remembers waking up in the hospital.

Medical reports claimed that Harrouff was “writhing in contortions” and howling while at the hospital.

Dr. Resnick questioned whether Harrouff was lying, but concluded that he was not and really was insane.

Harrouff’s case is set to go to court in November 2019.