A mother was irritated with her husband because of his work schedule, so she sent him a text expressing her frustrations. When he came home, though, she realized how lucky she actually was. A photo she took in the moment she realized how much she had to be thankful for has gone viral.

According to Faith Tap, Katie Spence Pugh was feeling fed up with her husband and his job one day. She explained her feeling in a post on the Love What Matters Facebook page.

"I snapped this picture the other night at the end of a long day. I was tired. I was irritated," Pugh wrote in the post. "I had sent my husband a text telling him that I knew it wouldn't make a difference, but I wanted him to know that I was feeling fed up with how much he works and with all that I have to do everyday by myself. The full time job, cooking dinner, bathing kids, weekend trips without him, keeping up a home, you name it I was resenting it."

Pugh's husband is a farmer and she says that she has the same feelings about her marriage around the same time every year "throughout planting and harvest season."

When she was feeling down about her marriage, her husband came home and ate dinner with their daughter and Pugh had a realization. She snapped a photo at that moment to capture when she began to appreciate all that her husband does: 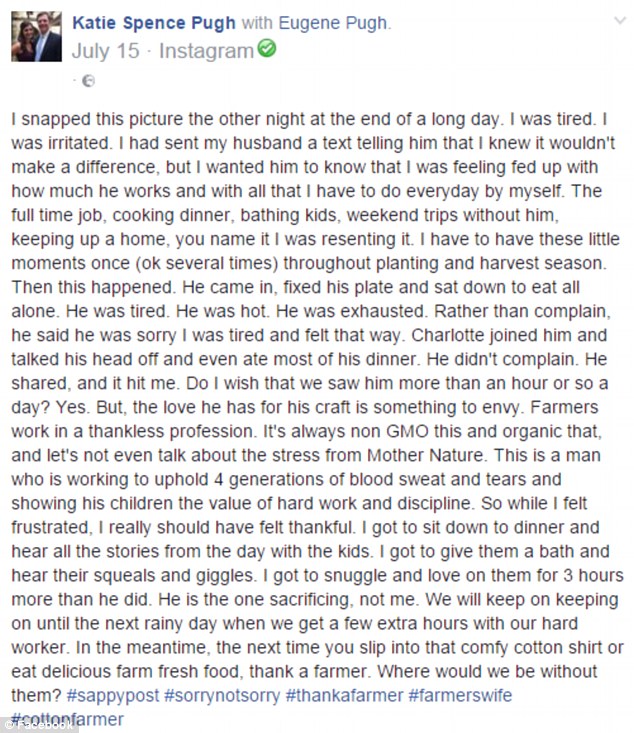 He came in, fixed his plate and sat down to eat all alone. He was tired. He was hot. He was exhausted. Rather than complain, he said he was sorry I was tired and felt that way Charlotte joined him and talked his head off and even ate most of his dinner. He didn't complain. He shared, and it hit me. Do I wish that we saw him more than an hour or so a day? Yes. But, the love he has for his craft is something to envy. Farmers work in a thankless profession. It's always non GMO this and organic that, and let's not even talk about the stress from Mother Nature.

This is a man who is working to uphold 4 generations of blood sweat and tears and showing his children the value of hard work and discipline. So while I felt frustrated, I really should have felt thankful. I got to sit down to dinner and hear all the stories from the day with the kids. I got to give them a bath and hear their squeals and giggles. I got to snuggle and love on them for 3 hours more than he did. He is the one sacrificing, not me. Pugh said she shared her story to remind people how important the work of a farmer is.

"We will keep on keeping on until the next rainy day when we get a few extra hours with our hard worker. In the meantime, the next time you slip into that comfy cotton shirt or eat delicious farm fresh food, thank a farmer," Pugh wrote. "Where would we be without them?"