Officer Jody Thompson witnessed a lot of bad things while on the job. He’s had to deal with murderers, robbers, and other criminals. But the ones that he dislikes the most are the child abuse cases. Officer Thompson thinks it is unbearable that people take out their rage and frustration on a tiny human – someone who cannot defend themselves and who do not know any better.

But one call in 2015 changed Officer Thompson’s life forever. Over the radio, the dispatcher sent him to a house in Poteau, Oklahoma where he had to help save the life of a child. That was because the call had come in about child abuse. 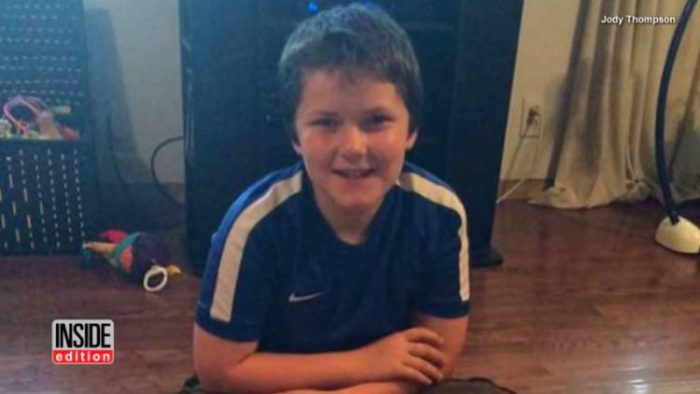 Children were always close to Officer Thompson’s heart. He and his wife had three of their own. That’s why child abuse calls always made him angry, and he wished he could do something to help lift the abused children up and out of the horrible situations they found themselves in.

Little did he know but on that day in 2015 in Poteau, Officer Thompson would be adding another child to his family of five.

When he arrived at the scene, an 8-year-old was cowering in fear. He was shocked and afraid and badly beaten. His hands and feet were bound with a rope, and the boy was covered in bruises. He had been shoved into a trash barrel. Before this had all happened, the boy’s parents had held him in the shower and soaked him to the bone. He was cold and tied up and vulnerable. Officer Thompson’s heart went out to the child.

Thompson felt an instant connection to the boy. He helped him out of the situation and brought him to the hospital. He vowed, then and there, not to leave the boy’s side. When John, the boy, arrived at the hospital, he was in critical condition. But while John recovered in the ICU, Officer Thompson was by his side. It didn’t take long for John to regain his strength and his spunky spirit.

When John was deemed healthy enough to leave the hospital, the Thompsons adopted John into their family.

Two years after the adoption, John is a straight-A student. He now excels in the gifted program at his school and is doing much better than he was when his birth parents were stuffing him into a trashcan.

While this would be a happy ending, would you believe me if I told you things got even better? Well, they did, and it was all thanks to Officer Thompson and his wife.

While they were adopting John, they learned that his birth mother, who was locked in jail, had given birth to a baby girl. Without waiting for a second, the Thompsons drove to the hospital and picked up the newborn. She was not even 24-hours old when they started the adoption paperwork.

During an interview with KFSM, Thompson said he knew he wanted John to join his family as soon as he saw him.

Officer Thompson not only puts his life at risk while on the job, but he also wants to help others live their best life too.