A graphic video (below) of a decapitated venomous snake flashing its fangs one last time before dying is going viral on social media.

The clip was uploaded to Facebook by Texas resident Jill-Scott Mollett on July 9, the Daily Mail reported. It shows a deadly black moccasin snake, also known as a cottonmouth snake, moving its head after being decapitated.

"So the girls found a cottonmouth water moccasin today, in our flower bed of all places," Mollett wrote. "We didn't have a knife close to us, so Avery chopped [its] head off with some tree loppers. The girls' favorite part was when the head kept trying to bite stuff for a few minutes after it was chopped off its body. #CountryLivingAtItsFinest."

The snake eventually stops moving.One of the spectators then prods its head, checking for any signs of life. Streaks of blood can be seen surrounding the snake's head, and a photo of the decapitated creature was also shared.

The video of the snake was shared by media outlets all around the globe. It has been viewed more than 4 million times on Facebook, and shared more than 800 times.

Several social media users commented on the video and photo. Many were outraged by the gruesome killing, while others appeared concerned about the safety of the children in the video.

"How about you all teach your kids how to look at their surroundings," wrote one Facebook user. "See a snake. Go the other way. Most snake bites in the US occur when people are trying to kill them. You're all inexperienced morons."

"Good lord," wrote another. "Leave the snakes alone. They eat a lot of other potentially dangerous animals (rats, other snakes, etc.) and finding one in your flower bed is common. Leave it alone for an hour, come back, and it should be gone. Otherwise call someone to professionally remove it."

"You know cotton mouth snakes are super dangerous right?" added another commenter. "One bite can kill an over weight grown man. You shouldn't wait for it to bite you to kill it because then it's too late. 'It didn't deserve that' neither did those cows you're eating huh? Oh but that's different." 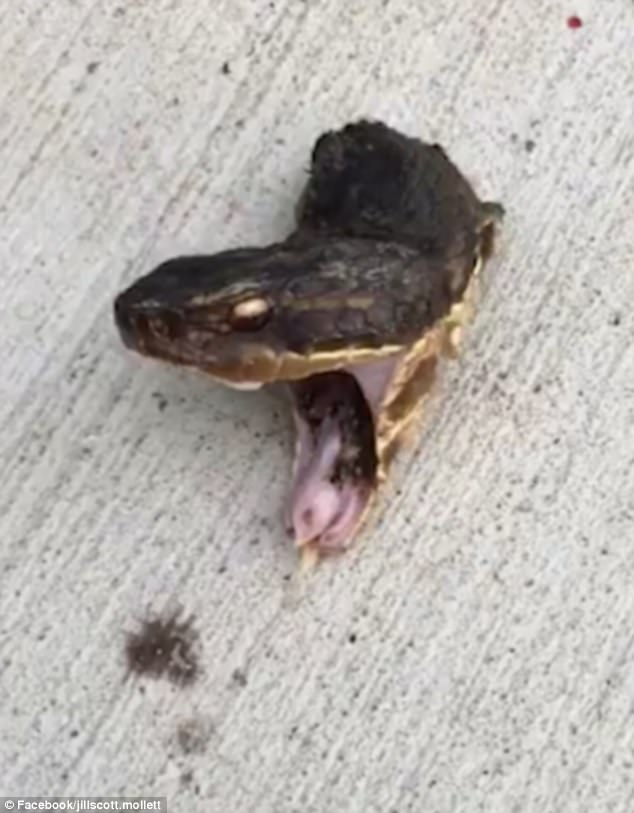 "What would you do if a snake came out at you or came out of a flower bed?" asked another user. "You'd try to kill it, wouldn't you? Its natural instincts. We kill for a living. We're just as dangerous as any other animal. What'd you expect?"

A bite from a black moccasin snake could potentially lead to an amputation, but a bite from one of these snakes is rarely fatal, according to the Daily Mail.