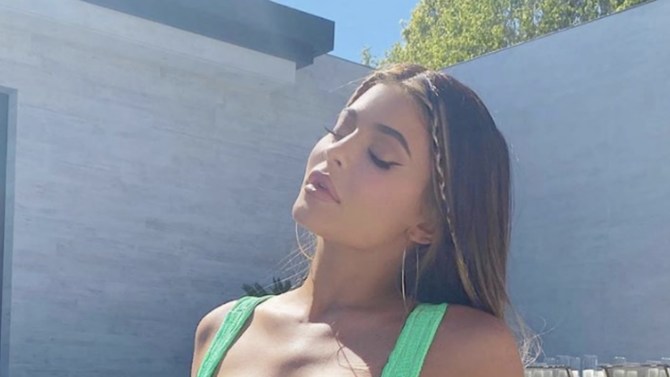 22-year-old Kylie Jenner took to social media to flaunt her gorgeous body. She wowed fans with her teeny tiny neon green bikini that showed off her fabulous curves.

The racy shots were taken as she lounged in the pool of her new $36.5 million home. However, the new house was not Jenner’s intended point of focus, as her fans were barely able to look away from her tanned bikini-clad figure. The "Keeping Up With The Kardashians" star is seen sprawled out on the floor of her massive compound, giving fans the perfect look at her gorgeous body. The photo comes just days after Drake referred to her as his "side piece." The Drake scandal involves a song he did with Future years ago. While the song was never released, it was leaked earlier this week.

This line had fans speculating that Jenner and Drake were dating. However, Drake quickly addressed the leaked song on an Instagram post, stating that the song was never supposed to be released. He apologized, writing: "A song that Mark ran last night on night owl sound live set shouldn't have been played. It's a song that leaked 3 years ago and got scrapped shortly after. He was going to keep in the drake/future catalogue,” adding, "Last thing I would want to do is wake up having any friends of mine feeling disrespected so I just had to say that to start off the day."