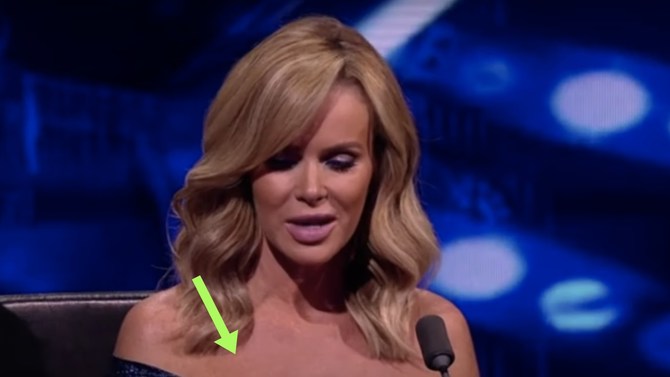 Amanda Holden stunned Britain’s Got Talent viewers when she appeared on the show wearing a dangerously low gown.

The 49-year-old sparked controversy online with her busty display in a low dark blue gown that also featured a very high slit on her left thigh.

Some viewers became convinced that they could see Holden’s nipples through the dress, with one person writing: "Is it me or are Amanda nipples coming out her dress put them away cringing for you."

Another person wrote: "Is it my eyes or are Amanda Holden nipples nearly falling out of the dress." A third commented: "Sometimes less is more. No class.”

However, some fans were amazed by the daring look. Holden shared a sultry photo of her in the gown with her 1.5 million Instagram followers ahead of her BGT appearance.

She captioned the post: "BGT tonight 8pm @itv! So excited for a show full of incredible acts + we get to see a theatre show (finally!) with a performance from the cast of Hairspray."

Holden joined Alesha Dixon, Ashley Banjo and David Walliams, on the judges’ panel for the last night of semi-final acts.

She revealed that she had sleepless nights after learning that Cowell had broken his back following the horrific motorcycle accident.

After hearing the news of the accident in August, she sent him some Lego books, cashmere socks and butterscotch Angel Delight. Holden added that she feared he could die and could not sleep because she had not heard from him.

She told The Sun: “I honestly panicked it could be fatal. I felt physically sick as I didn't know how bad it was. I wanted him to be alive, but I also wanted him to be able to walk as he's such a good friend.”

An ITV source confirmed that Cowell would not be able to make the Britain's Got Talent finals as he is still recovering at home.

The source stated: "He will not return to the panel in time for the final."