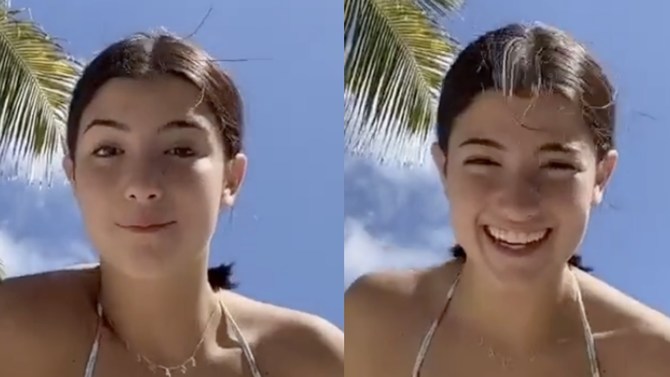 Charli D’Amelio, 15-year-old member of TikTok’s Hype House, was miffed enough to respond to negative comments on a bikini video she took while on vacation in the Bahamas.

The TikTok video was filmed by Avani Gregg, D’Amelio’s friend and fellow Hype House member. In the video, D’Amelio was dancing to “Sugar” by Brockhampton. Most of her fans were quick to note how happy she looked in the video, stating that they were glad she was “living her best life.”

"Anyone else think it's inappropriate for a 15-year-old to dance to this?"

Hilton later wrote another comment: "I wish I looked that good in a bikini at 15!"

When a commenter expressed concern that the chosen song was too “sexual,” D’Amelia responded: "oh well... am i not allowed to wear a swimsuit or allowed to dance to trending songs? i'm so confused as to why you care enough to post this."

Madi Monroe, another TikTok star who was vacationing with D’Amelia, received criticism for her bikini dancing videos as well. Monroe expressed how bad the comments made her feel, and her boyfriend, Christopher Romero, showed his support.

D’Amelio came to Monroe’s support with a strongly worded message: "Everyone needs to shut the hell up about people's bodies it's not okay and it hurts when it's about you no one deserves that and madi is gorgeous inside and out so."

D’Amelio stated that she would keep posting when she feels “happy and confident," adding "so if me wearing a swimsuit at the beach is a problem well sucks to suck doesn't it."

She later tweeted that she needed space to “breathe.”

D’Amelio and Dixie, her older sister, have previously revealed that they receive “hundreds of thousands” of negative comments daily, many of which include body shaming.

Marc D’Amelio, the girls’ father, told The Daily Campus: "We've talked to a lot of people who have had not only long-term notoriety but also instant fame who have been trained to know it's part of the job. We turn the other cheek on [hate] now. We take the [threatening and creepy comments] more seriously and we have had to go down the road of getting the authorities involved. For the most part, the comments are 90% positive and 10% negative."​