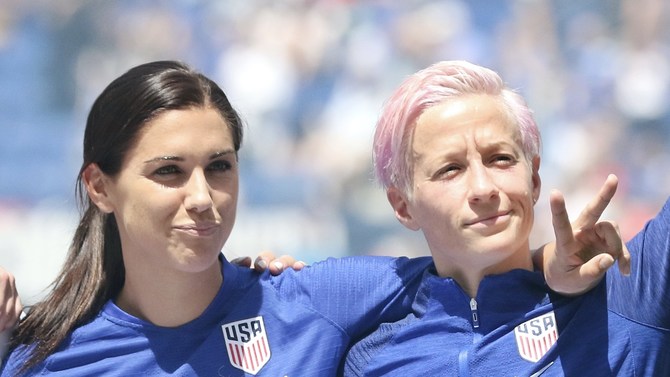 The U.S. Soccer announced on Wednesday that its Board of Directors voted in favor of repealing a policy that mandated members to stand during the national anthem.

The policy was initially put in place after Megan Rapinoe decided to kneel during the national anthem before a National Women’s Soccer League game, in support of Colin Kaepernick’s protest efforts. She stated that she sympathized with Kaepernick’s feelings towards the anthem, and the backlash he got for his protest.

“It is overtly racist," Rapinoe stated, speaking about the response Kaepernick received. "And quite honestly, being gay, I have stood with my hand over my heart during the national anthem and felt like I haven’t had my liberties protected, so I can absolutely sympathize with that feeling. The very least that I can do is continue the conversation with him by kneeling for the anthem.”

U.S. Soccer has admitted that it made a mistake: “It has become clear that this policy was wrong and detracted from the important message of Black Lives Matter.” The U.S. women's national team demanded that the anthem policy be repealed, and the players released a statement that read: "The Federation should immediately repeal the 'Anthem Policy,' publish a statement acknowledging the policy was wrong when it was adopted, and issue an apology to our Black players and supporters. Further, we believe the Federation should lay out its plans on how it will now support the message and movement it tried to silence four years ago."

U.S. Soccer issued a statement, issuing an apology for not listening to its players, fans and minority communities and for its failure to properly address these issues: “We have not done enough to listen—especially to our players—to understand and acknowledge the very real and meaningful experiences of Black and other minority communities in our country. We apologize to our players—especially our Black players—staff, fans, and all who support eradicating racism. Sports are a powerful platform for good, and we have not used our platform as effectively as we should have. We can do more on these specific issues and we will."