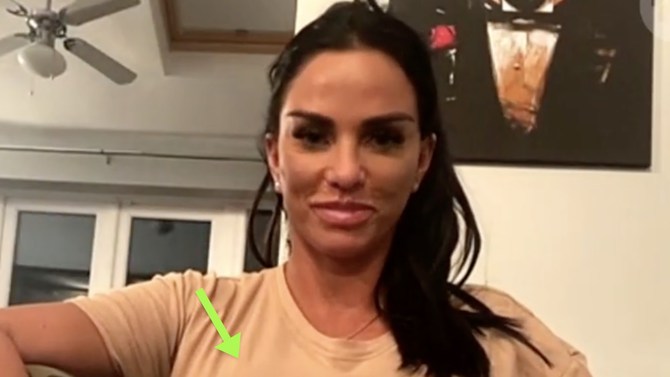 42-year-old former glamor model Katie Price showed Studio 10 viewers more than they asked for during her interview on the Australian show. She joined the panel while in her own home, but her outfit was particularly revealing.

The mother of five wore a nude T-shirt during her appearance, and despite being covered up, her chest was partially visible underneath the skin-tight top.

She readjusted the top several times throughout the interview, drawing attention to her chest.

During the interview, she discussed her relationship with her ex-husband Peter Andre, who she met while filming I’m A Celebrity in the Australian jungle in 2004. The couple got married in 2005, but later divorced in 2009.

Katie is now dating former Love Island star, 31-year-old Carl Woods. He appeared on the show in 2016, but did not find love.

Speaking about her new boyfriend, she said: "I think he looks like Channing Tatum. I finally found my prince. He appreciates me for me and he understands my job and what comes with it."

A source close to Katie states that Carl was her “ideal man” and that the pair instantly “clicked” when they met.

"Katie wasn’t looking for love or a serious relationship but just weeks after meeting Carl, she fell head over heels for him," the source told The Sun Online. "She’s surprised how fast they clicked. He’s her ideal man, really: he’s got a job and his own money, he’s fit, they have a laugh – and she really fancies him." Carl, a car dealer in Essex, is a regular at the celebrity hotspot Sheesh in Chigwell. He also appeared in Killer Camp in 2018 – a horror reality whodunnit set in the 1980s in an American summer camp.

Katie's rep told The Sun Online: "I can confirm Katie is dating Carl Woods and is delighted to introduce him publicly in this manner. Going forward Katie requests they have the space to allow them to enjoy their relationship privately unless otherwise at a public engagement."