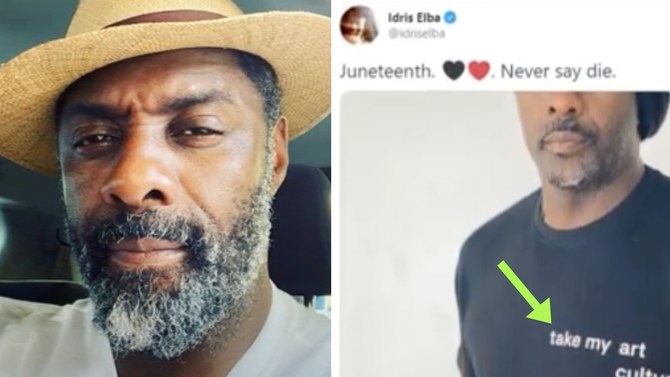 On Juneteenth, the June 19 celebration of the emancipation of slaves in the United States, Idris Elba posted a picture of himself in a T-shirt to mark the day.

However, Elba was quickly called out for his “tone-deaf” post, which he later deleted.

Many fans and celebrities were quick to call out Elba’s mistake, pointing out that the message on the T-shirt was “tone-deaf.”

He was slammed for pushing the narrative that it was okay for the black community to lose their rights and have their identities stolen to propagate mainstream culture, just as long as their lives were not in danger. One person responded to the post: “How about let us keep our sh*t… especially our lives?! Tf.”

Another person argued: “The shirt should say ‘Don’t take anything that belongs to black people. Period.’ Take it and burn it.”

Another one wrote: “Our music and art and culture is our way of saying to the world that we exist and they can’t take that from us. Where they take away our culture, they will eventually take our lives.”

Another person tweeted: “Actually, here’s an idea, how about they take… none of it? What kind of backward permission is this? Dumbass shirt.”

A number of Elba’s fans defended him, stating that his intentions were right, while some stated that life does indeed matter more than anything else. One person commented: “It sucks that we’re always quick to attack our own without communicating to understand first,” while another one wrote: “Most things are tangible and/or replaceable. However, LIFE, it is values cannot be calculated. There is no ‘return receipt.’ So #Idris, I hear you!”

Elba later deleted his post, and replaced it with the image of a black T-shirt with the word “Deleted” on it. His caption featured a single black heart emoji.

Many praised him for realizing and correcting his mistake, and some fans thanked him for listening.