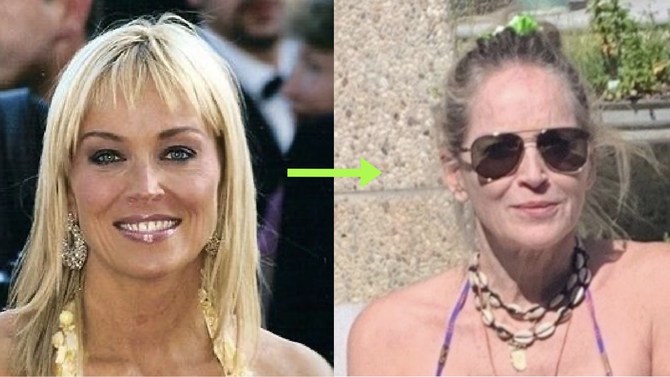 62-year-old Sharon Stone wowed fans after posting a poolside bikini pic as she soaked up the sun.

She donned a two-piece quilt designed bikini, a cowrie shell necklace, gold watch, and aviator sunglasses. Next to her was her little adorable pup.

Earlier in the day, she posed in a strange helmet by the pool as her family lounged in the water.

She captioned this pic: "Keeping my head together." Last month, Stone was struck by tragedy after her adoptive grandmother and AIDS activist, Eileen Mitzman, succumbed to coronavirus complications.

Stone and Mitzman met in the 1990s while working as an HIV/AIDS activist. Stone took to social media to announce that her adoptive grandmother was in a New York hospital, dying alone.

She wrote about her relationship with Mitzman and her husband, Neil: "I met her a long time ago when I was beginning to work as an AIDS activist so many years ago."

The couple became AIDS activists in 1989 after their daughter, 17-year-old Marni, was diagnosed with HIV. She was among the first heterosexual women to publicly reveal their diagnosis.

In 1982, the couple lost another daughter after she got into an accident after prom. In 1991, they lost Marni. Crying, she continued: "Tonight she is going to die in a New York hospital, she has coronavirus, but she will die because she has septic, and various illnesses, and none of us can go to be with her. But she will die a warrior, and I think we should grieve like warriors."

She quoted Dylan Thomas, and continued: "Tonight, go out of your window and scream and I want you to fight back and scream and cry and scream out against this thing. I don't want her to die alone."