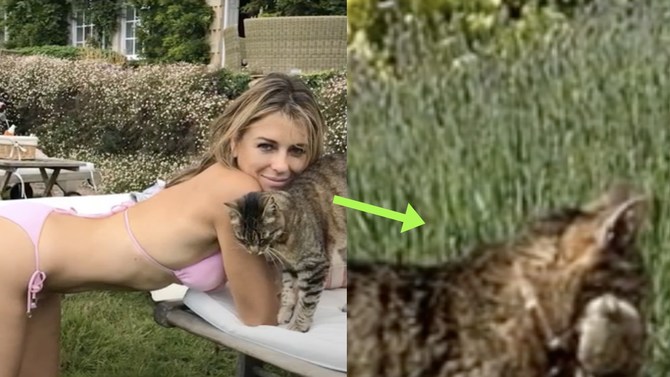 54-year-old Elizabeth Hurley shared a picture on Instagram praising her 16-year-old “beastly” cat, Mitzi, for saving her lettuce patch from a rabbit.

She captioned the pic – which showed Mitzi carrying a limp rabbit in its mouth – “Mitzi is 16-years-old and still at it... beastly cat (but my lettuces happy).”

Hurley is close with Mitzi, who she playfully calls Mitzi Kitzi. The cat, together with her two black Spaniels, Ava and Mia, have been regular features on her Instagram.

In 2016, Hurley returned from a New Year’s trip to India and found that her Bengal cat, Mr. Mew, had gone missing. She asked her followers to look out for the cat, and offered a “big reward” for his safe return. She captioned her post: “My beautiful Mr. Mew is missing. He's a small Bengal and very friendly. My son and I are devastated. We live near Donnington in Herefordshire.”

She wrote on Twitter: “Please look out for him if you live locally. Big reward for his safe return.”

Six months later, Hurley was reunited with her long lost Mr. Mew. She celebrated on social media, writing: “Happy days!!! Mr. Mew has been found. Six months missing and now found. Thank you to everyone who kept looking.”

Last week, Hurley posted a picture of herself and her 18-year-old son, Damian, walking with their dogs in the countryside.

She captioned the post: “The dogs have never had it so good- full time, full on love & cuddles,” while Damian only wrote: “On the move.” In the picture, Hurley was dressed in a simple yet tight fitting top, with her bright pink underwear and stomach peeking underneath.

Damian, on the other hand, was pictured walking away from the camera, the dog taking center stage.

Hurley has been isolating with Damian and her 80-year-old mother, Angela, in her country home.

She stated: “In these scary times I feel incredibly lucky to live in the countryside and have lots of outside space. As well as my son, I have seven other people living with me including my 79 year old mother and her sister- also in her late 70's- and one of my best friends who is in the highest risk group with severe respiratory problems. Keeping everyone as safe as possible (and fed) is a full time job. We all are full of the highest admiration for our wonderful NHS staff and are doing everything we can to not add to their burden.”