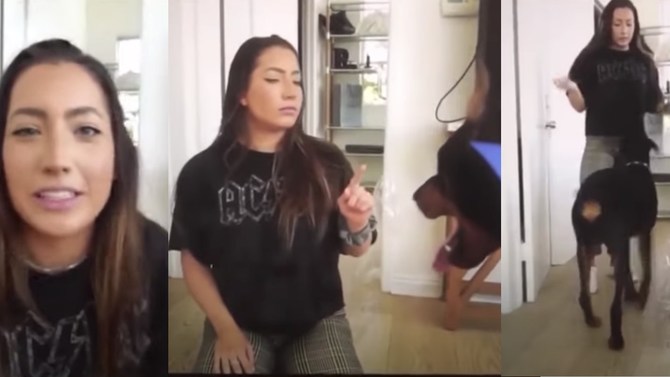 20-year-old Brooke Houts is apologizing after accidentally uploading an unedited video which shows her hitting, shoving and spitting on Sphinx, her dog.

She tweeted: “I apologize to anyone who has been [affected] negatively by the footage. When my 75 lb. Doberman is jumping up in my face with his mouth open, I do, as a dog parent, have to show him that that behavior is unacceptable. But I want to make it known REGARDLESS of what my dog does, I should not have acted that way towards him.”

She then insisted that she was not an animal abuser and that Sphinx was not in pain.

“Anyone who knows me personally knows I have an immense love for animals, including my own,” she wrote. “I would never do anything to purposefully physically or mentally harm any animal. Again, I should NOT have yelled at him or as been as physically aggressive as I was, and I’m fully aware of that. He was not hurt, nor has he ever been physically hurt by me. I know I’ll be in many future situations where he’s being physical, but I will not respond this way again.”

She was apparently trying to upload an edited video of her plastic wrap prank on the dog.

Despite her apology, social media users called for her “cancellation.” She has over 300,000 subscribers.

Some of the comments read:

"Are you serious? You are immature and need anger management."

"You don’t deserve him if you can’t care for him give away to someone that will."

Fans were especially outraged because Houts’ public persona is based on her relationship with her pet.

When contacted by Inside Edition, she declined to comment.

Houts’ video is being investigated by the Los Angeles Police Department.