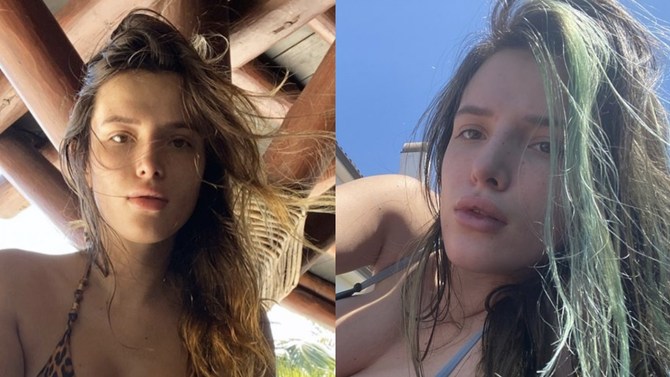 Bella Thorne took to Instagram on Saturday to share some smokin’ hot bikini pictures taken in the backyard of her LA mansion.

The 'Life Of A Wannabe Mogul' posted sultry string bikini photos, with one picture showing the actress lying down near her pool.

She captioned the pictures: "ITS A HOT SATURDAY nothing else to do but to do this ^^ so here I am. Doing this."

In the past few weeks, Thorne has graced her Instagram followers with lots of bikini pics and sexy in-home dancing videos while quarantined.

Fans flooded the comment section, with one writing, "Urgh, you are gorgeous, woooow."

"Omg @bellathorne this is too" another one added. Many of her fans were gushing over her quarantine body, and one wrote: "Wow abs during quarantine!!! the hottest EVER!"

"Hot Hope we get to see the rest of you sometime soon," another posted.

Benjamin Mascolo, Thorne’s Italian pop star boyfriend, has been stuck in Italy amidst the pandemic, unable to join his beau.

"So beautiful!! I loved the Paradise City trailer. It's amazing!!! I shared it on my instastories. Hopefully, it goes to #1 Trending!!!"

Despite the pandemic, Thorne has continued working as much as possible, and she made headlines after it was announced that she will be appearing alongside Michael Jackson’s 22-year-old daughter, Paris, who will be playing Jesus in the upcoming movie “Habit.”

Thorne will be playing the role of "a woman with a Jesus fetish who masquerades as a nun to escape a violent drug deal."